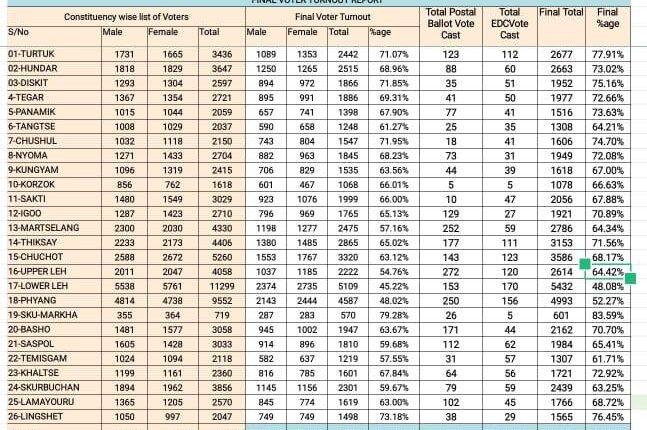 Leh, October 26: Nearly an year after granting Union Territory status to Ladakh, BJP returned to power in the Ladakh Autonomous Hill Development Council in Leh district second time with 15 seats, five short of its tally in the previous House.

In the Hill Council elections, in which National Conference and PDP did not participate in protest over the abrogation of Article 370 by the Centre on August 5, 2019, BJP’s number going down from its tally in the previous House has come as shocked many even within the saffron party especiall when had organised a high voltage campaign involving nearly half a dozen union ministers and even senior party leaders from the Centre and Jammu Kashmir. With two National Conference councilors and an independent also joining BJP, the party had 20 seats in the previous 30-member Hill Council.

The Congress who had only six councilors last time improved its tally to nine winning three more seats including two of Uppar and Lower Leh and also Sakti which had in 2015 elected Gyal P Wangyal, BJP councilor and Chief Executive Officer of Hill Council Leh. While two seats were won by independents, the remaining four seats will get filled up through nomination by the Ladakh UT administration.

These were the first election to the Hill Council in Ladakh after Central government had declared Ladakh a Union Territory on August 5, 2019, which had been the long pending demand of Buddhists, a majority community in Leh. However, BJP lost both the Uppar and Lower Leh seats in Leh town to Congress.

while the saffron party sweeped Nubra Valley winning all the five seats there, the two – Chushul and Nyoma falling on Eastern Ladakh border where India and Chinese troops are in a stand off postion, went to independents.

Political observers attributed BJP’s poor performance to its decision to go for polls despite wide spread resentment among people over the Centre’s dill dally attitude towards their demand for constitutional safeguards to them under VIth schedule of the Indian Constitution on the pattern of Bodo Territorial Council.

The BJP dominated last Hill Council in its meeting, which was also attended by BJP MP Tsering Jamyang Namgyal, had unanimously passed a resolution seeking safeguards under VIth Schedule, Article 371 or Domicile Act of the Constitution to protect the rights of the indigenous people of the Union Territory”. However, as there had been no further movement in the matter, local leaders of all the parties cutting across party lines had decided to boycott the elections.

However, BJP high command, thinking that absence of two main regional parties – NC and PDP from the electoral battle, will come to its advantage decided to go for polls and persuaded its local unit to participate in it. Apart from public resentment over the issue of constitutional safeguards, presence of Aam Admi Party first time in the electoral battle too proved spoil sport for BJP. AAP, however, failed to open its account in the elections.

A total of 89,776, electorate including 45,025 women, had exercised their franchise in 294 polling stations spread over 26 constituencies across Leh district to seal the fate of 94 candidates including 26 each of the BJP and Congress.

Since the formation of the hill council in 1995, the Congress had swept the polls thrice, while the Ladakh Union Territorial Front had won the elections in 2005.

The BJP wrested control of the council from Congress for the first time in the last elections by winning 18 out of 26 seats.

Kargil district of Ladakh had a separate hill council which was elected in 2018 for a five-year term.