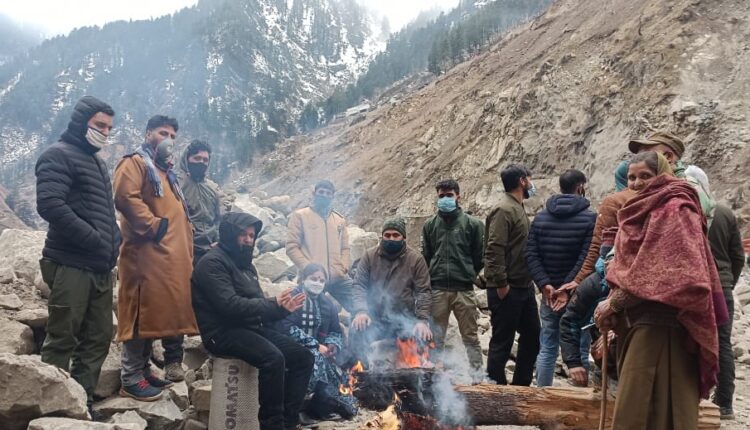 JAMMU, JANUARY 22: At an altitude of 12,000 feet, with temperatures hovering around of 5 degrees Celsius, District Development Council (DDC) chairperson Pooja Thakur has been sitting on a dharna in Dachhan tehsil of Jammu and Kashmir’s Kishtwar district since Wednesday.

Thakur and others, including local residents who joined her, are demanding that people from the area be hired as workers at the under-construction 1,000-megawatt Pakal Dul hydro electric power project at Dangdoru, reports The Indian Express.

DDC members, who were elected in 2020 during the first-ever DDC elections in Jammu and Kashmir, have been presented as a link between the people and the administration in the aftermath of the abrogation of J&K’s special status and its reorganisation into two Union Territories.

Thakur, who is from the National Conference (NC), took office as Kishtwar DDC chairperson on February 18, last year.

The Pakal Dul hydro electric power project is expected to complete by the end of 2023 and start operations from March 2024. Prime Minister Narendra Modi laid the foundation stone for the project in May 2018. The project is being constructed by Chenab Valley Power Projects Limited (CVPPL) on Marusadar river, a tributary of Chenab river at an estimated cost of Rs 8112.12 crore. For civil works of the dam, CVPPL has allotted contract to Jaiparkash Associated Limited.

The dharna had led to the suspension of work on the project. However, work resumed on Friday afternoon after Thakur appealed to the workers to resume work, and asked local residents to return to their homes to observe Covid-appropriate behaviour.

“I have conveyed to the administration that I will continue to hold the dharna at the project site until issues concerning the local people are met,” Pooja Thakur said.