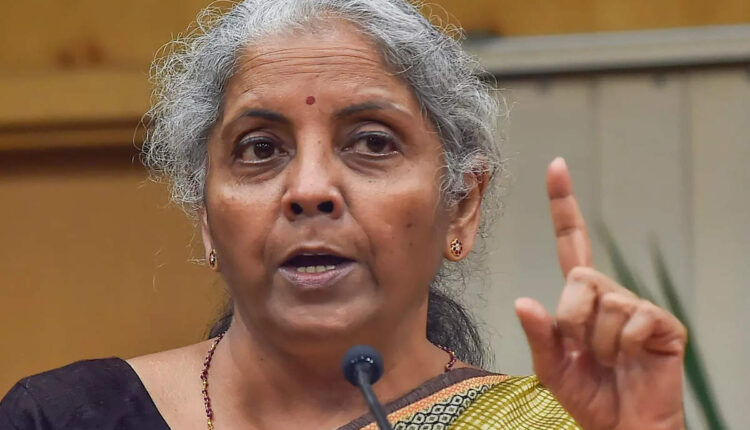 Speaking at a function at the General Zorawar Singh Auditorium in Jammu University here, she said “as much generosity all of us will have to put in our resources to make the state work well in a transparent manner, any wrong doing which has happened in the bank, any loans which have been taken and not repaid till now; I am sure our system will work in such a way that the wrong doers and the money which has been taken away will all be brought back’’.

Remining the audience that NPAs of Banks used to be cause of worry for the government, she said that “as soon as in 2014 when Prime Minister Modi (Narendra Modi) came to power, in order to bring the NPAs down there were specific formulations which included – recognise the NPA, address them, resolve them, recapitalise the bank and make sure that there are response in the banking sector. As a result of which, the NPA has come down  today,’’ she added.

“Not only they are coming down so that the banks need not to do provisioning for bad accounts, but those who took the loans and let the become NPA by not paying back the tax payers’ money deposited in the bank, we at the government have actively pursued them, whether they are in the country or have gone away from India. We ensured that their properties are attached and through a legal process are sold and auctioned out and those moneys have back to the banks’’.

“That shall continue to happen and irrespective of the ways NPA holders are and irrespective of the way accounts were,’’ she said, asking the Banks to “actively pursue’’ every NPA so that the tax payers’ money which has been taken away from the bank and not service is brought back to it. “That shall apply to J&K as well,’’ Finance Minister said, adding “we should take back every money which has been taken from the bank and is not serviced. It should come back to the bank’’.

She earlier inaugurated a number of government schemes and distributed letters regarding sanction of loans to various entrepreneurs.

Pointing out that she will ensure more bank activities take place in Jammu and Kashmir and the banks which have more equity come to the Union Territory and extend credit to the people so as to help them in setting up their businesses, the Finance Minister assured all the budgetary support needed for development of J&K.

She said that Prime Minister Narendra Modi’s repeatedly says that India’s growth story and planning for better global economy will not be as good as you expected to be unless every state progresses as if just one state lags behind, your growth story would itself be slowed down.

“I can see the importance of this statement, and J&K should not be left in a slow pace of growth,’’ she said, adding “I would ensure that working together with the administration here, budgetary, banking and any other support you need will be extended so that you catch up with rest of us, with all Indians so that we move forward and the benefits of such a development reach every citizen’’. “On the banking side we will make greater effort to bringing in credit to the state itself and the creditis provided to him sothat he is able to reach better markets,’’ she added.

When asked about Congress leader Manish Tiwari’s statement about UPA government not taking action against Pakistan following the 26/11, Finance Minister said that “decisions of this nature are taken with clear headed leadership during PM Narendra Modi’s time and after taking forces into confidence, be it Pulwama or Sunjwan’’. The Government fave fullest rights to forces and this how India reacted during these times, she said, adding it was missing during UPA.