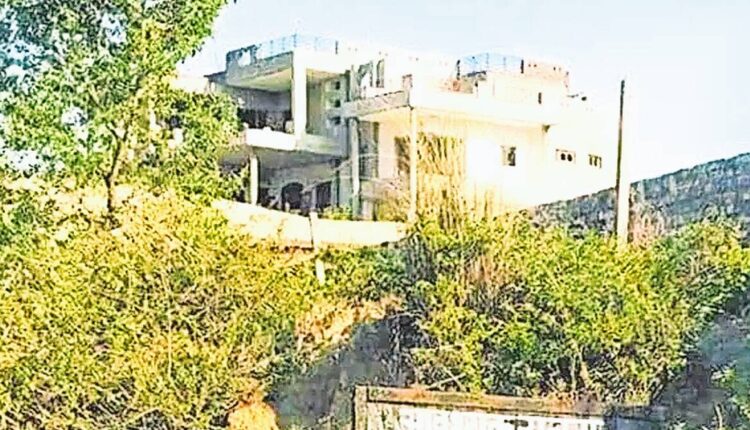 JAMMU, NOVEMBER 10: The UT’s Jammu Development Authority, in what may be called a big embarrassment for former Deputy Chief Minister of the erstwhile Jammu and Kashmir State, Dr Nirmal Singh, has asked him and his wife Mamta Singh to demolish their palatial residential bunglow at village Ban near Nagrota as the same has been constructed by them illegally.

Pointing out that the bungalow has been constructed without seeking any permission from the competent authority as prescribed under law, a November 8 order issued by Building Operation Controlling Authority, Jammu Local, asks them to “remove the illegal structure on your own level within five days from the date of issuance of this order’’. “If you fail to remove the illegal construction within the stipulated period of time, the same shall be demolished by enforcement wing of JDA and cost of removal shall be recovered from you as arrears of land revenue,’’ it read.

The demolition order also pointed that “in response to the show cause notice under Section 7(1) of J&K Control of Building Operation Act, 1988, served to you, no reply or reply of the same has not been by this office till date’’. It also referred to service of notices to them under Section 12(1) and 12(2) of the Act asking them to stop and remove the construction.

JDA officials, who wished not to be named, said that the next step is to demolish the illegal structure if the party served with the demolition order does not remove it on their own. “However, let us wait for the expiry of the time period given to demolish the structure and see what action the party take,’’ a senior officer said.

Dr Nirmal Singh, however, said that he has asked his lawyers to challenge the demolition order in the court. “I don’t know why his case is being singled out,’’ he said, adding that “it appears to have become part of the agenda of some people to get it politicised’’.

In September this year, the JDA in reply to an RTI had said the bungalow  of Dr Nirmal Singh and his wife at village Ban was constructed illegally. “Two cases of illegal constructions were reported — one by Sh. Nirmal Singh, ex-Dy CM, and second by Sh. Vijay Kumar Sharma,” had stated  The Jammu masterplan for 2032 was notified through SRO 90, dated March 3, 2017, she stated Dr Kusum Chib, JDA Collector, Land Acquisition, and Public Information Officer in reply to an RTI application seeking information about illegal constructions raised at Ban and Panjgrain villages between January 2016 and December 2020.

The controversy over the construction of palatial bungalow by Dr Nirmal Singh had first erupted in 2018 when Army’s Corps Commander of the Nagrota based 16 Corps had shot off a strong protest letter over construction work on a 2,000-sq-m plot, which was part of an estimated 12 acres of land brought by top BJP leaders via a company next to the Army’s ammunition depot in Nagrota.

In the letter, addressed directly to Nirmal Singh — he was Deputy CM then — the Corps Commander Lt General Saranjeet Singh had said that the house Nirmal Singh has constructed is illegal and “has implications on the security of a major ammunition storage facility as well as the safety of all personnel living in close vicinity of the ammunition depot”. Lt Gen Singh wrote: “May I request you to reconsider construction of residential accommodation in close proximity of the ammunition depot being a potential safety hazard.”

Singh had become Speaker of the J&K Legislative Assembly in May 2018.

Lt General Saranjeet Singh, according to sources, was reportedly constrained to write directly to Nirmal Singh because “the local administration was not responding to the Army’s repeated requests to stop construction work” which “is a serious security and safety breach”. Nirmal Singh had then told The Indian Express that opposition to his construction is “politically motivated”. “I have no legal binding that I cannot do the construction,” he said. “What the Army is claiming, it is their view and not binding on me,’’ he had said.

Following inaction by civil and police officials in the matter, Army had approached the High Court challenging the construction saying that it was just 580 yards from the perimeter boundary wall of the ASD in Nagrota. The court in response to the petition had directed authorities to ensure “strict implementation” of a 2015 government notification barring general public from construction within 1,000 yards of defence works.

However, despite court order, former Deputy Chief Minister of the erstwhile state of Jammu and Kashmir and BJP  leader, Nirmal Singh, and his family moved into their newly constructed bungalow at Ban village, near the Army’s ammunition sub-depot (ASD) on July 23, 2020.

Following is the demolition order issued against Singh and his wife:

Delhi: Vice President M Venkaiah Naidu hosted the Governors, Lieutenant Governors and Administrators from the States and Union Territories, along with their spouses, on the eve of Governors’ Conference-2021, at Upa-Rashtrapati Nivas today.