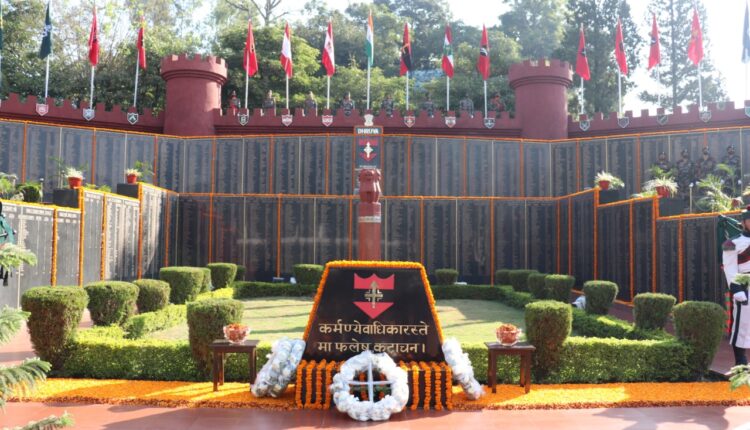 Udhampur, October 27: Infantry Day was celebrated in a traditional and solemn manner at all the army formations in both the Union Territories of Jammu Kashmir and Ladakh.

At the Northern Command headquarters in Udhampur, Chief of Staff, Northern Command Lt General C Bansi Ponnappa laid wreath a Dhruva Shahid Smarak and complimented all ranks and veterans of Infantry for their devotion to duty and indomitable spirit while working under trying and challenging conditions. The day was marked by laying of wreath by Lt Gen M V Suchindra Kumar, GOC White Knight Corps at the Ashwamedh Shaurya Sthal and remembering the martyrs. He saluted their contributions and sacrifices to protect territorial integrity of the Nation and fighting terrorism with unstinting resolve.

At the Nagrota based 16 Corps Headqurters, the Day was celebrated in a traditional and solemn manner at Nagrota. The day was marked by laying of wreath by Lt Gen M V Suchindra Kumar, General Officer Commanding of the White Knight Corps at the Ashwamedh Shaurya Sthal and remembering the martyrs.

The ‘Fire & Fury’ Corps at Leh also celebrated the Infantry Day with traditional solemnity and reverence. Lieutenant General PGK Menon, General Officer Commanding, ‘Fire and Fury’ Corps laid a wreath at the War Memorial in Leh and paid homage to all the brave heroes, who have made the supreme sacrifice in the line of duty.

Indian Army celebrates 27th October every year as the ‘Infantry Day’. It was on this day that the 1st Battalion of the SIKH Regiment landed at Srinagar airbase and displayed resoluteness and extraordinary courage to thwart the evil designs of the Pakistan Army, who had invaded Kashmir with the help of tribal raiders. The bold and gallant actions carried out by the Indian Infantry Battalions in the ensuing days ensured that the nefarious designs of Pakistan Army were forcefully defeated.

This epic battle continues to motivate thousands of Officers, Junior Commissioned Officers and men, who brave all odds of demanding terrain and adversary and continue to put up a resilient and determined opposition to every obstacle that impedes national sovereignty. Infantry has been at the forefront in the entire spectrum of activities including maintaining constant vigil at the Line of Control, combating insurgency, providing relief to Awaam during natural calamities and restoring peace and tranquility in foreign lands as part of United Nations Peace Keeping Contingents. The challenges, howsoever, unprecedented and unique, each and every time, ‘THE INFANTRY’, as the biggest fighting ensemble of the Indian Army, has risen to the occasion.

In the Ladakh Sector, Infantry battalions of the Indian Army have been part of every war fought in the Sector, bringing laurels to the Army and to the Nation. The saga of courage and sacrifice displayed during the battle of Rezang La in 1962 and more recently during Operation VIJAY in the Kargil Sector are testimonies to the spirit of sacrifice of the Indian Infantry soldier. Of the 21 Param Vir Chakras awarded till date, seven PVCs were awarded to officers and men who fought in the Ladakh Sector, including three posthumous awards.