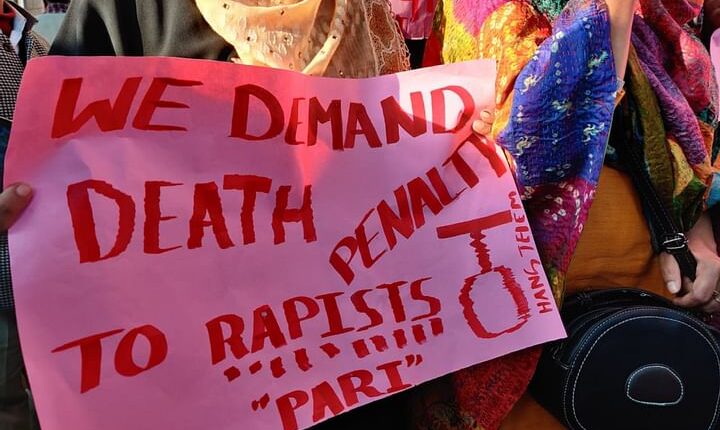 Karnataka, October 28: In view of increase in incidents of rape on females in different parts of the country, the Karnataka High Court has recommended the legislature and the Central Government to also make a provision for death penalty in case of gang rape by further amending the provisions of Section 376D of the Indian Penal Code.

Stating that gang-rape is more dangerous than murder, a division bench comprising Justices B Veerappa and K Natrajan recommended capital punishment for gang-rape in addition to the existing provisions of life imprisonment with fine. The Court made the above recommendation while upholding the life sentence imposed on seven accused of gang-raping a student of the National Law School of India University (NLSIU) Bangalore in 2012.

In its judgment, the Bench also stressed on the need for gender sensitivity in order to curb the offence of rape, saying “We hope and trust that the increasing gender sensitivity is crucial to enhance women’s safety. The safety of women is not a guarantee despite the stringent amended law is placed after Nirbhaya’s case. It is high time for the Home Department, State Legal Services Authorities, Woman Organisations, and Prints and Electronic Media to start conducting awareness programmes for the general public.”

Apart from advocating for a change in the societal mindset and spreading of awareness on gender justice, the Court also suggested the following practical measures:

“…On the practical side, few of the suggestions are worthwhile to be considered. Banners and placards in the public transport vehicles like autos, taxis and buses, etc. must be ensured. Use of streetlights, illuminated bus-stops and extra police patrol during odd hours must be ensured. Police/Security guards must be posted at dark and lonely places like parks, streets, etc. CCTV cameras have to be installed in the important places…”

On October 13, 2012, near a road which is situated between the main building of Bangalore University and NLSIU, the victim and her friend were seated in their parked car. The convicted persons surrounded the car holding deadly weapons like iron rods, saws, long knives, daggers, and rope.

The convicts forcibly opened the left front door of the car and dragged the victim girl into the forest area, where they gang-raped her.

After their arrest, the convicts were sentenced to life imprisonment by the trial court under Sections 427, 366, 323, 324, 397, 376(2)(g) read with 149 of the Indian Penal Code. On an appeal against this order, the High Court declined to interfere with the trial court order.

While doing so, the Court held, “the accused persons have acted like a deadly beasts in the forest. It was, as if the wild animals were hunting their helpless prey like a rabbit for satiating their sex hunger. In the present case, these accused persons have hunted victim girl in order to satisfy their desire of lust and have gang raped simultaneously one after another and some of them twice and thrice, which is barbaric against an human being, who are worst than cruel animals, and cannot be tolerated.”

The Court also rejected the plea by the convicts seeking leniency, opining that the damage caused by them is immense and irreparable, and that the victim has to suffer throughout her life.

Apart from making these observations, the Court also proceeded to give out various suggestions to the courts and the public on how to deal with rape cases and rape survivors, adding “Justice demands that the Courts should impose punishment befitting the crime so that the Courts reflect public abhorrence. The Court must not only keep in view the rights of the criminal, but also the rights of the victim of the crime and the society at large while considering the imposition of appropriate punishment.”

The Court noted that the survivor had come to India from Kathmandu, Nepal to join NLSIU. “Because of the ghastly incident committed by the accused on the victim girl, the law and order of the entire nation particularly Karnataka State is made responsible. Since the ‘reputation of the Country is at stake’, no lenience can be shown to the accused persons. Any misplaced sympathy to the accused comes in the way of upholding ‘dignity of the court, majesty of law, traditions and cultures right from our ancient times.”

Stating that “rape is not only an offence against victim girl, but a crime against the entire society”, the Bench quoted Swami Vivekananda, who said,”the best thermometer to the progress of a nation is its treatment of its women”. The Court also appreciated the courage shown by the victim in pursuing her complaint against the accused to protect her “Dharma” inspite of the unfortunate incident.

The Court further suggested that gender equality be made a part of school curriculum and that awareness programmes on gender sensitization must be initiated.

“A child should be taught to respect women in the society in the same way as he is taught to respect men. Gender equality should be made a part of the school curriculum. The school teachers and parents should be trained, not only to conduct regular personality-building and skill enhancing exercise, but also to keep a watch on the actual behavioural pattern of the children so as to make them gender sensitised. The educational institutions, government institutions, the employers and all concerned must take steps to create awareness with regard to gender sensitisation and to respect women.”

The Bench noted that the relatives of the victim and the society at large should be supportive of survivors of rape so as to ensure that the right to life of such person/s under Article 21 is protected. The Court further mentioned that during the Vedic times, great value was attached to the chastity of women. Therefore, any attempt to rob her off of chastity was considered to be a sin. The punishment as per Manu for such crime included throwing the perpetrator out of the society, said the Bench.

“It is surprising to note that when victims of rape in modern India are admonished by the Society, the Vedic Society was much more supportive of survivors of rape,” the Bench observed, adding “we, the Judges are the societal parents. If our concern for the society of girls/ women can be summed up in one sentence that “An attack on anybody’s daughter is an attack on our daughter.”