Polling for first phase begins on brisk note in Bihar 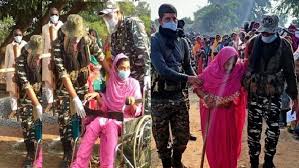 Patna, October 28: Polling at 71 places of the 243 assembly constituencies in Bihar began on a brisk note on Wednesday morning during the fist phase of elections.

Nearly 7 per cent voters had cast their votes during the first three hours of one of the biggest electoral exercise globall being held during prevailing COVID-19 situation. There were long queues at polling stations most of which were in Naxal affected areas.

As part of SOPs to deal with the COVID-19 during the polling, only 1,000 voters will be allowed at a polling booth at a time, apart from stagerring the polling hours and extending postal ballot facility for those above 80. Thermal scanners, hand sanitiser, soap and water have also to be ensured for the voters at polling stations.

Prime Minister Narendra Modi will interact with DMs of…

Instead of the existing limit of 4 members, now 6 members…

A total of 1,066 candidates are in the fray in 71 constituencies whose fate will be decided by more than two crore voters. Of them, 952 are men and 114 women.

Central Armed Police Forces and Bihar Police and Home Guards have been deployed in strength at all polling stations and the buildings housing them.

Special security arrangements have been made for the Naxal-affected areas as most of these areas are going to polls during the first phase.

Announcing the election schedule for the 243-member assembly on September 25, Chief Election Commissioner Sunil Arora had said that polls will open as usual at 7 am but the voting hour will be extended by one hour until 6 pm, except in the Naxal affected areas, so that COVID-19 patients can vote in the last hour of the day.

Breaking: IAF to get big Refale boost in next five months, with three more Rafeles arriving in January, another three in March and three more in April 2021. While France is willing to offer more Rafale, Safran is offering to make M-88 engines in India. Not only Rafalem M-88 engines can be deployed to power Tejas and AMRCA also.