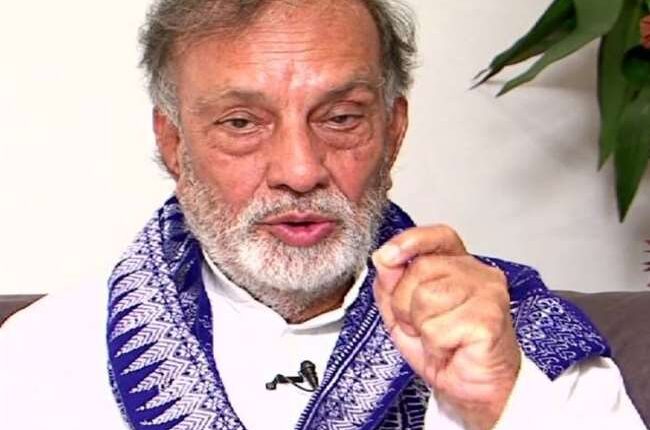 Jammu, November 7: A war of supremacy started in Jammu and Kashmir National Panthers Party with its chairperson Harsh Dev Singh removing the party founder Prof Bhim Singh from the post of chief patron of the organisation within hours of latter’s meeting the PAGD members.

“Panthers Party has nothing to do with Prof Bhim Singh’s meeting with PAGD members and he had gone there in his individual capacity,’’ said Harsh Dev Singh talking to media persons here. He has “grown old’’ and he often “doesn’t appear to have any control over his statements’’, he said, adding that party has decided to remove him from the post of patron.

Pointing out that Prof Bhim Singh has no power to take decision on behalf of the party from today onward, he said that Panthers party will fight for the rights of Jammu. It is a “nationalist, secular and democratic party’’ and it believes in taking along all the people of Jammu division irrespective of their caste, creed and religion, he said, adding the voices against India and for restoration of Article 370 and 35-A are not acceptable to it. “Panthers party has no place for anti-national elements and those propagating anti-national agenda,’’ he said while announcing removal of party’s found and chief patron Prof Bhim Singh from all organisation posts.

Prof Bhim Singh when contacted described Harshdev’s action as “childish’’, saying that he cannot remove him being party’s founder and its chief patron. Moreover, one needs to set up a disciplinary committee, issue notice seeking an explanation before taking a decision against any person, he pointed out.

About his meeting with PAGD members including NC president and former chief minister Dr Farooq Abdullah among others, Singh said that he was invited by the National Conference leader to find out his stand to resolve the present crisis in Jammu and Kashmir.  “I told them that he stands for restoration of statehood without any delay with all the fundamental rights provided in the Indian Constitution,’’ he said, adding that he and his party have been pleading with the President of India to convene a meeting of Parliament to reconsider restoration of Article 370 on merits.

Pointing out that he had been fighting in supreme court for many years seeking removal of Article 35-A, he said that Panthers Party stood for restoration of fundamental rights to all the residents of Jammu and Kashmir and it was possible only after the removal of this provision.