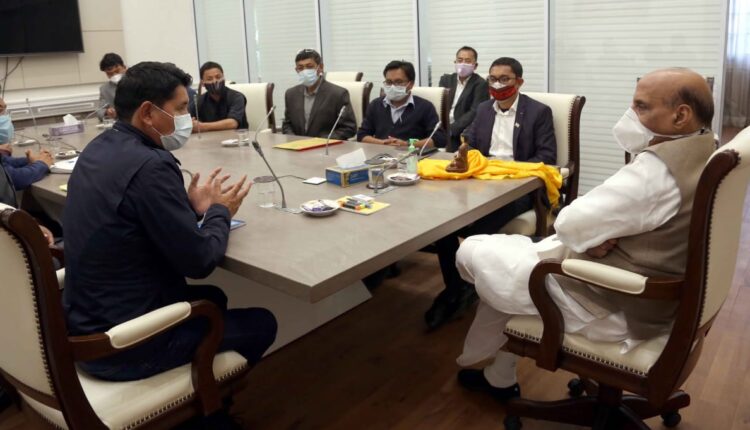 Chief of  Defence Staffs General Bipin Rawat and other defence officers were also present at the meeting. During the meeting, issues relating to ongoing border issue at the Line of Actual Control and welfare of people of Ladakh were discussed in details which included establishment of a separate Command in Ladakh, extension of Battalion in Ladakh Scout Regiment and opening of a Women Battalion in Ladakh Scout, a Sainik/Airforce/Military School in Leh. The meeting also discussed the issue of making functional the Advance Landing Ground of Chushul, Mudh and Fukchey, construction of alternative Military Airport in Padum Zanskar and Wakha Thang, early completion of Nimoo-Padum-Darcha road and also black topping of Wanla, Lingshed to Padum road.
The delegation also stressed on early constriction of Chushul-Dungti-Demjok-Fukchey Road, construction of multipurpose tunnels at Khardongla, Changla, Namkila, Zingral-Tharuk and Photola in Ladakh, deployment of soldiers of the Ladakh Scout Regiment on Indo-China Border in view of the jawans of Ladakh Scouts being son of soils and familiar with the terrain, construction of bunkars for civilians living along border to protect their Lives in an emergency, permission/NOC from MoD for Installation/operationalisation of mobile tower already sanctioned in Border areas of Ladakh, formal permission for tourists  visiting  Siachen base, use of mobile (BSNL) towers under army authority by civilian living along border without any restriction/interruption.
Its other demands included release of land under Army occupation in Leh town and its periphery, especially village pasture land and State land meant for public purpose and assured Defense Minister that LAHDC, Leh will provide alternative land at suitable location for Army. Civilian land under Army’s occupation at border villages need to either vacate or paid compensation/rent as resentment is brewing among public due to loss of their source of livelihood. Delegation informed the meeting.
Release of three acres of Land from Airforce control at Thoise Nubra to make UDAN scheme implementable. Operationalisation of Thoise airport under UDAN which will make Nubra valley one of the most preferred tourist destination, easing out of restriction along border for native locals to take their livestock for grazing on traditional pasture land along border, increase in the tonnage volume on army aircraft during winter month to provide vegetables and other essential items in order to provide better and nutritious food to people especially during the COVID pandemic, relaxation and increase in vintage value of truck, buses and taxis from current vintage restriction so that livelihood of people involved in this trade are taken care of as mostly ex-servicemen are involved this trade through Cooperative Societies.
Relaxation in guidelines for procurement of milk, vegvetable and hay from local vendors of Ladakh, strengthening the civil-military liaison, better facilities for local labours at Siachen Glacier at par with troops like health, clothing, ration and handsome wages, were among other demands of the delegation. It also demanded that the Army ordinance in Ladakh should give preference to local while hiring manpower, especially the permanent labour class staff, besides regularising the services of local porters in border areas, or payment of better wages round the year.

Ban on 3G, 4G mobile data to continue in most parts of J-K

three soldiers among 6 killed in Pak shelling on LoC in Uri, Poonch