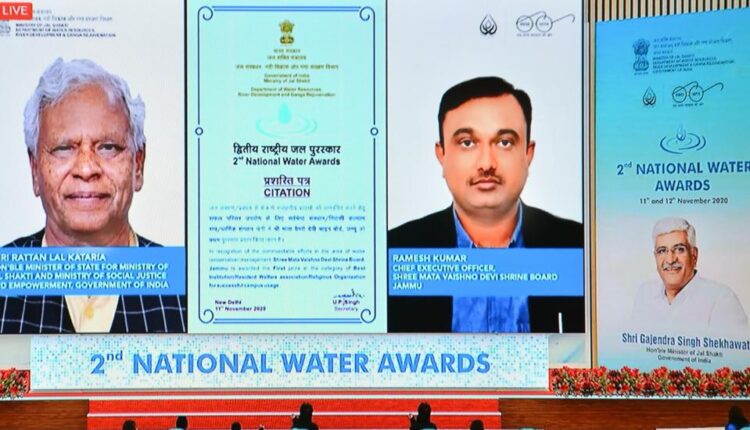 Jammu, November 12: Shri Mata Vaishno Devi Shrine Board has been adjusted best religious organisation in respect to water conservation management in the country.

The Shrine Board has bagged the first prize for water conservation management in the category of best institution, resident welfare association and religious organisation for successful campus usage, during the two day award distribution ceremony organsed by the Union Ministry of Jal Shakti which concluded on Thursday.

While Vice President of India M. Venkaiah Naidu was chief guest at the inaugural ceremony, the awards were given by Union Minister of Jal Shakti Gajendra Singh Shekhawat and Minister of State Rattan Lal Kataria.

It is pertinent to mention that the Shrine Board besides making concerted efforts to provide the best possible facilities to the pilgrims is, interalia, taking continuing initiatives and adopting best water management practices and techniques for water conservation. These include construction of water harvesting ponds and undertaking other works in the slopes of Trikuta Hills, installation of Water ATMs, recycling of Sewage Treatment Plants water for reuse in flushing of toilet blocks, installation of waterless urinals and rooftop rainwater harvesting etc.

To promote rainwater harvesting, the rain shelter shed on two sections of Tarakote Marg has been designed with the provision of collecting rainwater in the hood and taking it down to the collection tank through piped network envisaging subsequent use for landscaping work and sweeping purposes. Various provisions have also been made in the residential buildings of the SMVDIME as well as SMVDNS Hospital at Kakryal for rainwater harvesting for use in landscaping work etc, thereby saving a large quantity of water. The Board has made such provisions in its several other buildings also.

The installation of dedicated Fire Hydrants from Bhawan to Adhkuwari via Himkoti to mitigate fire incidents during summer season by lifting of treated water from Bhawan STP to reservoirs of 50,000 gallons capacity each at Hut Station, Bhawan, Saket, Himkoti and Adhkuwari, in normal course is to be utilised for floriculture, washing of track, construction works etc. The Board is also promoting the re-use of treated water from various STPs for flushing of toilet blocks, landscaping etc. In this context, an adequate water storage facility has been constructed at the Shrine Board’s Sports Complex at Katra and the treated water from STP at Niharika as well as rain water runoff from Niharika Complex is collected and used for landscaping and flushing purposes.

The Shrine Board is being awarded consecutively for the past many years in recognition of its initiatives taken in varied spheres. In 2019, Shrine Board received the ‘Best Swachh Iconic Place’ award under the initiative of Swachh Bharat Mission of Government of India, while in 2017 the Board received the ‘Special Swachh Iconic Place’ award under Swachhta Hi Seva’ campaign of the Government of India. In 2018, the Board was awarded with the Cleanest Religious Place award by the India Today Group.