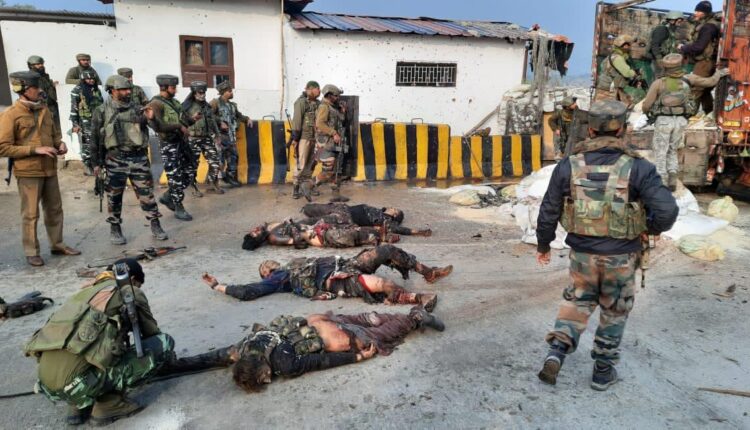 Jammu, November 19: In a swift and surgical operation, Jammu and Kashmir Police along with security forces on Thursday morning killed four Jaish-e-Mohammad terrorists near Ban Toll Plaza along the Jammu-Srinagar national highway near the Garrison town of Nagrota.

Two policemen were also injured during the encounter. Identified as Selection Grade Constable Mohammad Ishaq Malik and Constable Kuldeep Raj, both were evacuated to Government Medical College Hospital where UT’s Lt Governor Manoj Sinha visited to enquire about their health.

Eleven AK 47 rifles, three pistols, 29 grenades and other devices including mobile phones, medicines with  Pakistan marking, besides pouches and 30 kgs RDX and two IED circuits among other things were seized from them. It has been the biggest ever arms haul by police from slainterrorists across Jammu division after a long time.

The slain terrorists, whose identities are yet to be ascertained, were a fresh group of infiltrators who had crossed the international border in Samba or adjoining Hiranagar sector of Kathua from Pakistan side on Wednesday night, police sources said. In this context, they pointed out that the truck in which they were travelling had crossed Thandi Khui Toll Plaza in Samba district at 3.44 am.

Inspector General of Police for Jammu zone, Mukesh Singh, said that they were on way to Kashmir and going by the quantity of arms and ammunition seized from them, it appears that they had planned “something very big’’.

Ever since the announcement of DDC polls, police have been receiving inputs about possible infiltration bid byterrorists along with huge quantity of arms and ammunition in Jammu, IGP said, adding that they had accordingly stepped up vigil at all the vulnerable places including national highway.

Around 5 am, police naka party at Ban Toll Plaza stopped a truck bearing No. JK-01AL-1055. During checking, while its driver fled, terrorists hiding inside the truck opened fire on the police party injuring two cops.

Responding swiftly, the other policemen at the naka gunned down two terrorists. The other two terrorists were also killed during the ensuing encounter which lasted for only three hours, he added.

In view of the apprehensions about spurt in incidents of infiltration by terrorirsts ahead of the coming polls, the police had already intensified vigil along the national highway, he added.

The militants were carrying so much of weapons, explosive and ammunition that the truck caught fire following an explosion during the encounter.

The Thursday’s encounter at Ban Toll Plaza was second this year as three terrorists were killed by police and security forces there on January 31 as well. At that time also, the slain terrorists were on way to Kashmir from Jammu side and they too were a group of fresh infiltrators having entered the UT from Pakistan side through a cross border underground tunnel in Samba sector, which was later detected by BSF.

Of late, there has been spurt in infiltration attempts by terrorists along the international border in Jammu division. Even terrorists involved in the 2019 Pulwama terror attack were stated to have entered the UT through a cross border tunnel in Samba sector.

Though BSF had early this month also detected a damaged tunnel like structure in R S Pura sector, sources do not rule out the possibility of some more tunnels in areas along the international border.

Traffic between Ladakh-Kashmir on alternate days during winter