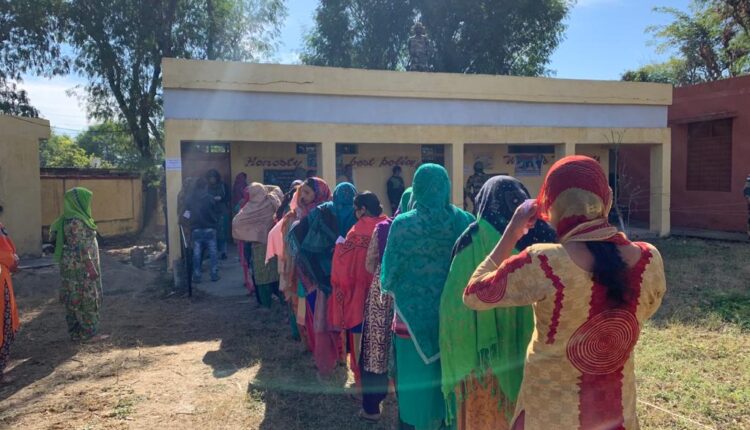 Jammu, November 28: Nearly 40 per cent of the seven lakh electorate exercised their right of franchise during the first phase of the first ever District Development Council elections being held in 43 constituencies spread over all the districts of Jammu and Kashmir till 1:00 PM Saturday.

The State Election Commission has fixed polling time from 7 am to 2 pm, it was likely to continue for some time more as there were queues at some polling booths in Jammu division. The poll percentage was finally likely to go beyond 60 per cent, sources said.

While polling started on a brisk note in Jammu division, it was low in Kashmir Valley in the morning. However, it picked up later in the day.

There were long queues at polling stations even in remote districts like Kishtwar, Poonch in Jammu division. A 100-year old Ambo Devi was brought by her son Kaku Ram at Sohal Higher Secondary School for exercising her right to franchise, while an  80-year-old  Simro Devi was standing in queue at the same polling station.

West Pakistani refugees also cast their vote in the DDC elections, though their number was not much in areas where first phase of polling took place. “Today is a historic day. Hindu-Sikh refugees from Pak, Valmikis and Gorkhas, all victims of atrocious Articles 35A and 370, today exercising their right to vote for the first time in 73 years. It’s a great moment for the nation and a tight slap on the pro-Pak and pro-China Gupkar Gang headed by Farooq Abdullah,’’ tweeted Prof Hari Om, a retired Jammu University professor,  a well known columnist and political analyst.

During the first ever DDC elections being held in Jammu and Kashmir, all the 20 districts in the UT have been divided into 14 constituencies each. The elections to all of them are being held in eight phases through ballot paper beginning November 28.

So far 36 Sarpanches and 768 panches stand elected unopposed much before the first phase of polling. Most of these candidates are in Kashmir Valley.