Former BJP minister’s name not in lists uploaded on website, but his college is built on state land 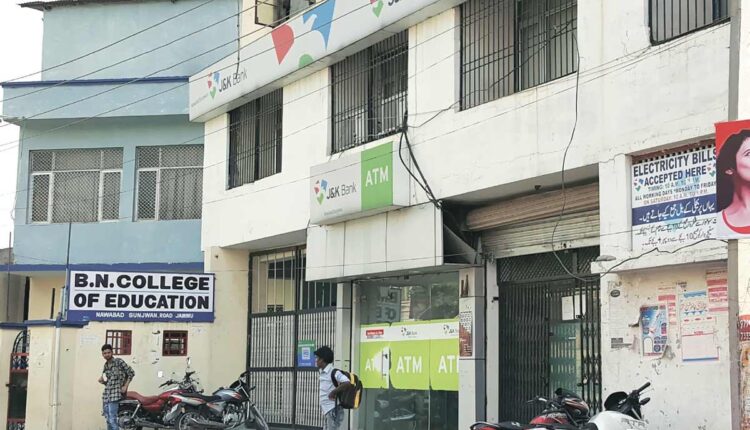 Jammu, November 30: BJP may be drawing solace that none of its leaders so far figure in the lists of occupants of State Land uploaded on official web sites of the UT, the Jammu and Kashmir administration in its recent status report filed in the Jammu and Kashmir High Court admits that an educational institution being run by former BJP minister Abdul Gani Kohli and his family members, is on State land in Channi Rama area.

Apart from this, in fresh lists uploaded on official web site of the Divisional Commissioner, Jammu, the names of an ex-Congress MLA, a sitting judge and son of a former Congress MP figure among the occupants of state land. They include ex-MLA Mula Ram and sitting judge Madan Lal who, according to the official lists, along with their two brothers – Rattan Lal and Bodh Raj, are occupants of 12 kanal state land at village Gho Manashan in Marh tehsil of Jammu district. Mula Ram is also stated to be in possession of another 3 kanal and 3 marla state land in the same village.

Another prominent occupant of state land named in the list is Satish Sharma, son of former Congress MP Madan Lal Sharma. He is stated to be in possession of 60 kanal of state land at village Lalyal in Marh tehsil. However, he did not avail benefit of the Roshi scheme that provided for transfer of ownership of state land being used for agriculture purposes to its occupants at the rate of Rs 100 per kanal.

Significantly, Satish Sharma is also contesting the District Development Council election as an independent from Bhalwal constituency which is going to polls on Tuesday.

Both Mula Ram and Madan Lal Sharma had also served as cabinet ministers in different governments in the erstwhile Jammu and Kashmir State.

Meanwhile, the status report filed jointly by Divisional Commissioner Jammu, Sanjeev Verma, and Principal Chief Conservator of Forests, Dr Mohit Gera in the Jammu Kashmir High Court reads: “BN College falls in Khasra No. 264 of Chani Rama (which is a State land) and not in Khasra No. 356 of village Sunjwan (forest land). BN College is being run by the family of former BJP minister Abdul Gani Kohli, who happened to be the lone Muslim candidate having got elected from Kalakote assembly constituency during 2014 polls on saffron party mandate.

The joint status report was filed pursuance to directions of the court in a public interest litigation filed by social activist-cum-lawyer Ankur Sharma, who also happens to be chairman of IkkJutt Jammu, an extreme right wing political party of Jammu, pointing out that the educational institutions being run by Kohli and his family were on forest land. As Kohli and his family had contested the PIL, the high court had asked the revenue and forest departments to demarcate the land and file status report.

At the very outset, both the officers referring to the directions of the high court point out that a joint committee of forest and revenue officials was constituted to find out whether the land on which BN College and other educational institutions had been running was a forest or state land. The officials included Chief Conservator of Forests, Divisional Forest Officer, Additional Deputy Commissioner, Assistant Commissioner (Revenue), all  posted in Jammu, besides Sub Divisional Magistrate Jammu (South) and Tehsildar Bahu.

On August 24 last, both the Principal Chief Conservator of Forests, J&K, and Divisional Commissioner, Jammu, themselves visited the spot along with members of the team and other field staff of both the revenue and forest department “to make a physical inspection of the site and the area’’, it said, adding “perusal and scrutiny of the revenue record was also made at the site’’.

“After carrying out an extensive exercise,’’ the team has submitted its findings and conclusion which say that an earlier demarcation done by a Commission of then revenue officers, as also the joint report of revenue and forest departments in February 2017 saying that “BN College and associated structures are located 800 karam (steps)’’ from the reference point graveyard “is correct’’. Moreover, “from the examination of revenue records of village Sunjwan and Channi Rama, it has come to the fore that no entry with regard to BN College and associated structures exist in revenue records,’’ it added.

“After examining the matter in entirety, by examining the findings of joint team of senior officers of revenue and forest departments, and thereafter carrying out the scrutiny of records and conducting a physical visit to the area and the site, it has been found that BN College falls in Khasra No. 264 of Channi Rama (which is a state land) and not in Khasra No. 356 of village Sunjwan (forest land),’’ the joint status report of Divisional Commissioner Jammu and Principal Chief Conservator of Forests J&K said.

when asked as to why Kohli’s name has not been included in the lists of occupants of state land uploaded on official website, Divisional Commissioner Sanjeev Verma said that they have submitted status report in respect to land as per directions of the high court. The matter is still sub judice.

Kohli when contacted said that he had purchased land long back. There is 2,100 kanal of state land in the area on which are constructed shopping malls, mosques, temples, commercial and residential structures. “If it comes out that my educational institutions are built on state land even then my case should not be singled out and treated like others in the area,’’ he added.

Mula Ram said that he and his brothers had inherited land from their ancestors who were cultivating it since generations.

Satish Sharma said that he had purchased 32 kanal of land from a person at the cost of Rs 8 lakh who had been cultivating it for past 60 years and the khasra girdawaris were also entered in his name in the revenue records. “After purchasing the land, I got those khasra girdawaris entered in my name, but later when I came to know that this was state land, I got those girdawaris cancelled on my own some six years ago and left my possession over it,’’ he said, adding that his only request to the government is to help him get back his Rs eight lakh from the person who sold this land to him.

Schools, colleges to remain closed in JK till December 31