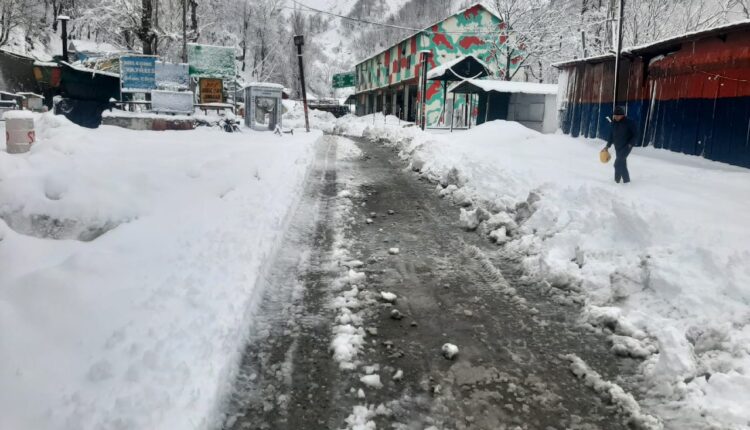 Jammu: With all major roads leading to Kashmir from Jammu closed due to heavy accumulation of snow and landslides for the fourth day on Wednesday, normal life remained disrupted in most parts of the Union Terriroty.

Apart from heavy snow accumulated at Jawahar tunnel, there were mudslides and shooting stones at Samroli, Nashri, Dhalwas, Marog, Cafeteria Morh, Panthiyal and Magarkote falling between Udhampur to Banihal.

Apart from road connectivity, the air link to Kashmir from Jammu also stands disrupted with all flights to Valley having been cancelled during the past three days.

Meanwhile, a CRPF sub inspector and an elderly women were killed following the collapse of structures at separate places in Srinagar and Kupwara districts due to snowfall. Souces said while the former died when a shed collapsed at the residence of former forme legislator Syed M Akhoon, the woman was killed when she came out of her house and the snow accumulated on the roof fell on her.

Meanwhile, authorities on Wedesday evacuated 22 families in avalanche prone Kulgam and accommodated them in a school in South Kashmir.

Authorities on Wednesday evacuated 22 families in avalanche-prone Marisle Nallah Kund area of Kulgam and accommodated them in a school in the south Kashmir district.

The Jammu and Kashmir Disaster Management Authority (DMA) has issued medium and low level avalanche warnings for higher reaches of Jammu and Kashmir. As per a communiqué received in this regard, medium level avalanche warning has been issued for higher reaches of Poonch, Rajouri, Ramban, Doda, Kishtwar, Anantnag, Kulgam, Kupwara and Bandipora districts besides Waltengu Nad, South and North portals of Jawahar Tunnel, Verinag, Kapran, Chowkibal-NC Pass, Gurez, Dawar and Neeru areas.