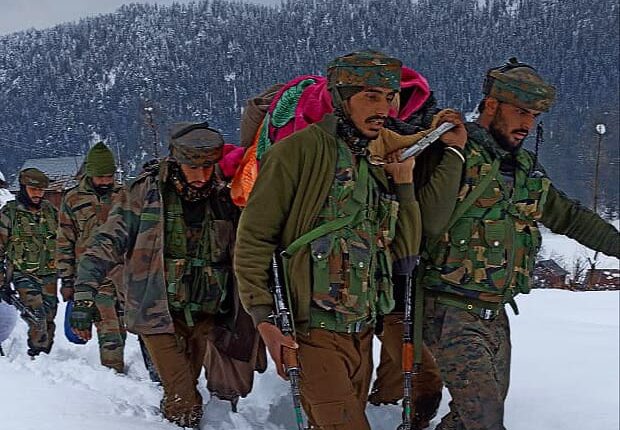 Kupwara: It has been snowing for nearly 24 hours, when at 2330 hours on  05 Jan 21 Army at the COB Karalpura, Kupwara received a distress call from Manzoor Ahmed Sheikh of village Pharkian, Kupwara.

The individual informed that his wife Shabnam Begum is undergoing labour pain and needs to be evacuated to the hospital immediately. Also, due to heavy snowfall and inclement weather, neither community health service vehicle nor civil transport was available and same was only possible after the snow was cleared from the road.

Understanding the gravity of the situation and plight of the family, the army troops at Karalpura along with battlefield nursing assistant and medical comforts, reached the spot on time. The troops escorted the lady and the family for about 2 km in knee deep snow till the road head, from where she was taken to Karalpura hospital. On reaching hospital the lady was immediately attended by the medical staff which coordinated beforehand by the Army with the civil admistration.

The unit furthering its efforts of Jawaan and Awam initiative, once again reached out to the needy thus establishing their faith in the Army. The family and the civil administration thanked the unit for its humanitarian efforts and recognised Army as the true friend of Awam at the time of distress.

The father came to the COB to distribute sweets to all troops in the COB after being blesses with a healthy boy.

BMO Shafi also called up the army camp to thank and inform, ” Thank you ,Army! It’s a baby boy!”.