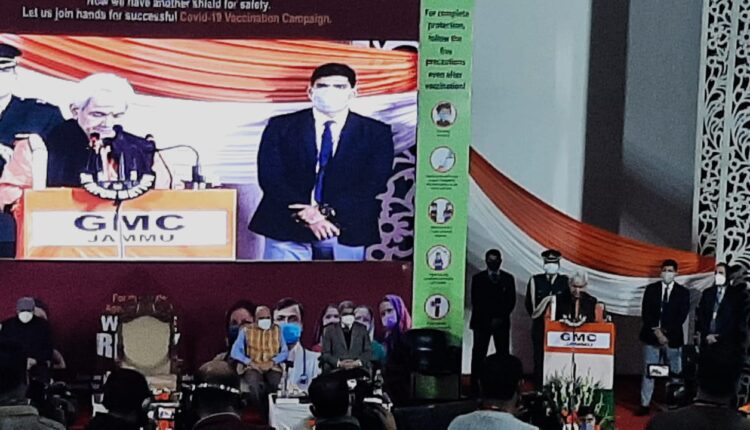 Jammu: Rolling out the vaccination drive at Government Medical College Hospital here, UT’s Lt Governor Manoj Sinha asked people not to pay heed to rumours about the efficacy of COVID-19 vaccine. Asking his administration to start a publicity campaign to reach out to the people, he said “today is a decisive day in fight against the pandemic’’.

Appreciating the frontline COVID warriors for their dedication and self-less service helping people to overcome this challenge, he said “it is a day of pride for the nation, but we need to remain cautious against those spreading rumours about the vaccine’’. “Your contribution will be written in golden letters when pre and post pandemic history will be written,’’ he said, asking people not to let down their guard for at least 45 days after getting vaccinated.

Chief Secretary BVR Subrahmanyam while speaking on the occasion said that the administration was fully prepared for successful vaccination drive. Expressed hope that the country will be free of pandemic within next three to four months, he said “as far as J&K is concerned, we have put in place an impressive strategy to deal with the virus. In fact, we have developed the capability of conducting five lakh vaccinations per day,” he added while praising the frontier warriors for their contribution in the fight against COVID-19.

Elaborating the vaccination strategy, Financial Commissioner, Health and Medical Education, Atal Dulloo said “ we are following the election booth management strategy where vaccination site wise management is being planned meticulously. The beneficiary will get SMS about the session, date and time with regard to both the doses and will be handed over a certificate,” he added.

Pointing out that the vaccination drive has been strated at 20 locations each in Kashmir and Jammu divisions with 100 people being vaccinated at each place, he said that around 1.6 lakh health workers will be covered in the first phase. They will be followed by nearly seven lakh frontline workers including security forces, paramilitary forces and police personnel, besides municipality workers and revenue department officials who are involved in surveillance and contact tracing, he added.

The third phase will include population above 50 years and those below 50 years who are suffering from co-morbities, he added. The number of vaccination centres will be gradually increased across the UT, he said, adding that the cold chain equipment is available at all the places.