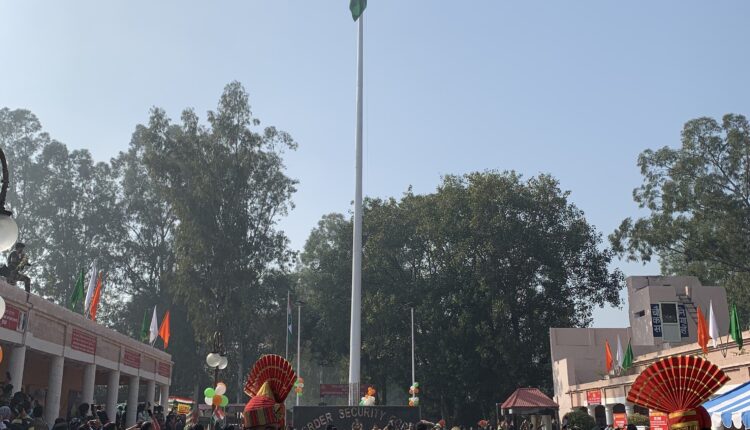 The 12 ft x 8 ft tri colour was hoisted on the 131 ft high flag post which had come from Rajasthan’s Bharatpur. The flag post’s base has a 10 ft x 10 ft concrete base which is also 10 ft deep.

It has been constructed with the assistance of Lupin Human Welfare Research Foundation despite objections from Pakistan over the raising of such a high structure within 50 mts of the zero line.

BSF’s Octroi border post  has drawn its name from an Octroi collection point in Suchetgarh village where erstwhile Indian Princely State of Jammu and Kashmir used to collect Octroi from traders for movement of goods between Jammu and Sialkote area of then undivided Punjab.

After 1947 partition of the country, the Octroi collection centre got replaced by a BSF forward post along the International Border. Pakistan too built its INAYAT Post opposite it.

However, Octroi continued to be important between two sides as it remained a meeting point for both sides for all purposes. Only two days earlier, BSF handed over its protest letter to their Pakistani counter part over the issue of cross border tunnel detected in Kathua district.

Speaking on the occasion, IG BSF N S Jamwal said the tri colour would serve as a landmark for Jammu, adding that BSF will keep it flying at all costs. The flag will be visible upto a distance of 10-15 kms on both sides of the border.

Earlier, UT’s Lt Governor Manoj Sinha unfurled tri colour at M A Stadium in Jammu. Addressing the Republic Day Parade, he assured the people that “political conspiracies and nefarious designs of a neighbouring country will never be allowed to succeed in this land of great persons and warriors”. The security agencies have effectively controlled violence and those who are trying to fulfil their political motives with the help of this proxy war, are being given a befitting reply, he added.

The Republic Day was celebrated with enthusiasm all over the UT. There had been no reports of any untoward incident.

Four soldiers hurt in grenade attack by terrorists in Kashmir