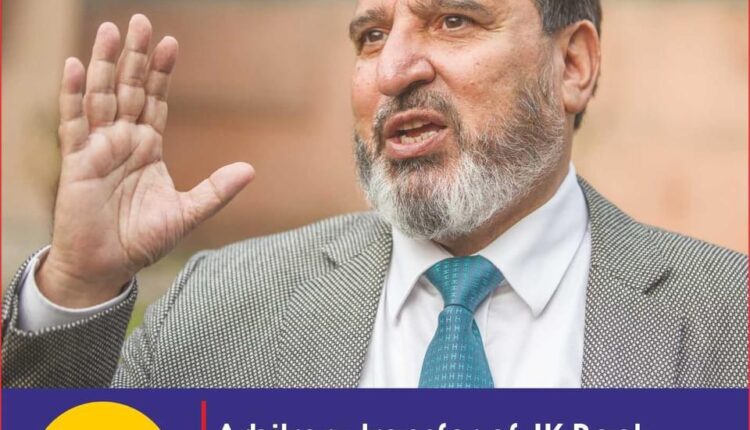 Srinagar: Apni Party President Syed Mohammad Bukhari on Friday expressed serious concern over the procedure adopted for transferring around 8.23 per cent shareholding of Jammu and Kashmir Bank to the Union Territory of Ladakh.

Referring to the decision, Bukhari termed the administrative diktat as unilateral and arbitrary in nature. He said J&K Bank is a prized possession of the residents of Jammu and Kashmir whose asset division is being unfortunately carried out without taking the actual stakeholders on board.

“The J&K bank has remained the spine of our economy for decades. It has grown and flourished because of the support of locals who have always put their unflinching faith and trust into it,” Bukhari remarked.

He said: “An arbitrary decision of transferring 4.583 crore shares to UT of Ladakh is creating a sense of gloom among the natives of Jammu and Kashmir. Government should revisit its decision and take all the stakeholders on board before taking any final decision in this regard.”

Jammu and Kashmir| Four terrorists of Let killed in two…

J&K | Encounter breaks out in Awantipora. Police and…

Similarly, he said that the government has unfairly transferred assets of the J&K House Chanakyapuri to the UT of Ladakh resulting into discrimination with the residents of J&K.

“The decision with regard to transfer of JK House assets was also unfair for the reasons that the population of the UT of J&K is much larger than the population of UT of Ladakh. Besides, the number of employees is also many times more in J&K than Ladakh. Similarly, the accommodation meant for the VIPs like Hon’ble legislators and Judges of J&K High Court has been transferred to the UT of Ladakh which has no legislative assembly,” he added.

Such decisions, Bukhari observed, have been conceived without any formal consultation with the stakeholders from Jammu and Kashmir.

“Presently, the majority of the people from J&K feel alienated with the mode of governance. Even though having a cadre of resolute and highly efficient local officers, the prized positions in different administrative departments are being accorded to the non-resident officers in J&K” He said

Bukhari urged the Lt. Governor led J&K government to halt the trend of capricious decision making and put serious efforts to win the trust and confidence of the locals in the region while respecting their wishes and aspirations.

“The people of J&K had yearned for a change. A change that would have addressed their long pending demands of fair representation in decision making. The developmental model projected by the government of India for J&K didn’t envisage any indiscrimination with the majority community while upholding the interests of the minorities,” he remarked.

Bukhari observed that if the measures with regard to the fair apportionment of assets and liabilities between J&K and UT of Ladakh were not taken on priority, the alienation among the residents of J&K will eventually grow and that is what the elements inimical to peace would desire for.

J&K | Encounter breaks out in Awantipora. Police and security forces are…