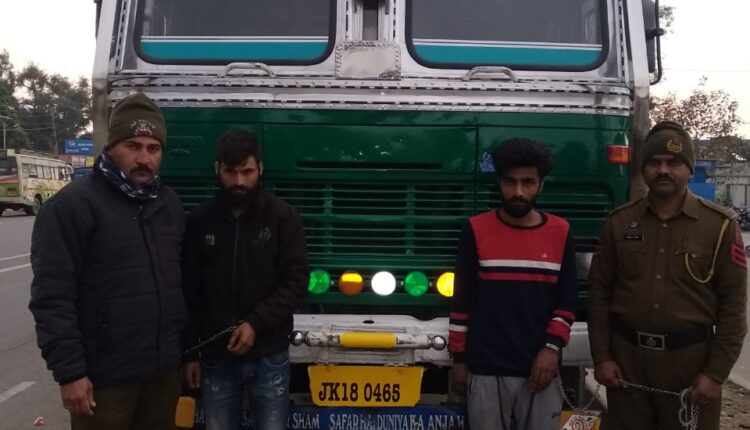 Jammu: Jammu and Kashmir Police on Wednesday intercepted three vehicles including two trucks and a Mohindra Tata Mobile and rescued 34 bovine animals being illegally transported to Valley. Three people were arrested in the matter and they have been identified as Mukhtar Ahmed of Qazigund, Mohan Lal of Palli Dansal and Gulzar Ahmed of Sandroh Dansal.

Baramulla: After hours of anxiety and fear, the pregnant woman who was rescued by army from snowbound Jabri village of north Kashmir on Wednesday, gave birth to a baby girl. One of the Army posts had received a distress call from locals of Jabri village during early morning hours about critical condition of a pregnant woman whose evacuation to hospital was getting delayed due to fresh snowfall. The post commander immediately activated and led the medical rescue team in a Gypsy to the village. At the same time, the Army contacted the Primary Health Centre at Boniyar and informed about the evacuation and subsequent admission of the patient.

Rajouri: Jammu Kashmir Police on Wednesday arrested a person on charges of killing his wife in Rajouri district’s Sunderbani town. Identifying the deceased as Rupakshi Sharma, she had reportedly died at her residence in Sunderbani’s Ward No. 4 under mysterious circumstances. Later during investigations, police found that she was allegedly strangulated to death by her husband Shanker Sharma.

One held with heroin in Rajouri

Rajouri: Jammu Kashmir Police on Wednesday apprehended a person and seized 11 grams of Heroin from him here. Identified as Mohammad Shakoor of Dhani Dhar area, he got apprehended when police intercepted his Scorpio vehicle which was on way to Rajouri.