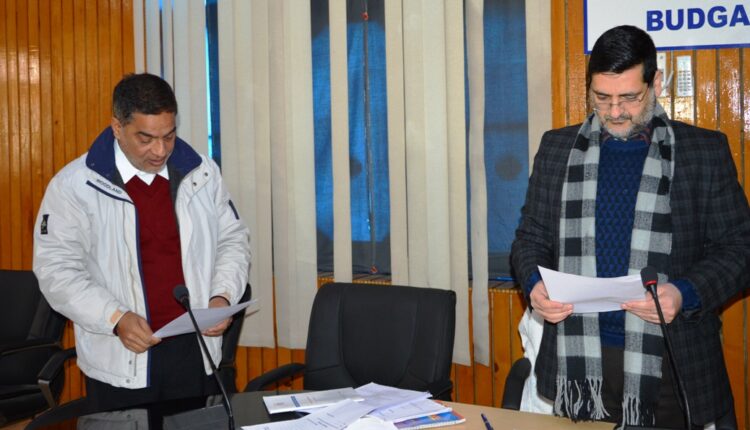 Srinagar/Jammu:  In an embarassing sitation for National Conferene due to cross voting within People’s Alliance for Gupkar Declaration, an independent Nazir Ahmad Khan was on Monday elected as chairperson of the District Development Council in Budgam.

Similarly in hilly Doda district, in Doda DDC, BJP’s Dhanantar Singh Kotwal and Sangeeta Rani Bhagat got elected as chairperson and vice chairperson, respectively, polling nine votes each, one more than the actual strength of the saffron party in the 14-member Council.

Significantly, in the 14 member Budgam District Development Council, National Conference alone has eight members, PDP and Jammu Kashmir People’s Movement (one each). The PDF and independents have two members each.

NC, PDP and JKPM are constituents of People’s Alliance for Gupkar Declaration (PAGD), which had fielded consensus candidates during the recently held maiden District Development Council elections held in Jammu and Kashmir.

However, there was a tie between Nazir Ahmad Khan (independent) and Abdul Ahad Dar (NC) as both secured seven votes each during polling. Accordingly, a draw of lots was held in which Nazir Ahmad Khan was declared elected as Chairman of DDC Budgam.

However, Nazir Ahmad Jahara (NC) was declared elected as vice chairman after securing nine votes against Nisar Ahmad Sheikh who got only five votes.

Of 13 DDC members in the district, nine made their presence in the scheduled election fulfilling the quorum limit of 2/3rd majority.

The Congress’s Nadeem Sharief for the post of chairperson and Mehraj Din (Jammu Kashmir Apni Party) for vice chairman got only five votes each.

Interestingly, in the 14 member Council, BJP has eight votes, followed by Congress (4) and National Conference and JKAP (one each).

BJP sprang a surprise when against its eight members, its candidates got nine votes each in the secret ballot for election of chairperson and vice chairperson.

“We are holding an enquiry to find out the member cross voting in favour of BJP,’’ said Nadeem Sharief. He, however, did not suspect any Congress member voting for BJP.