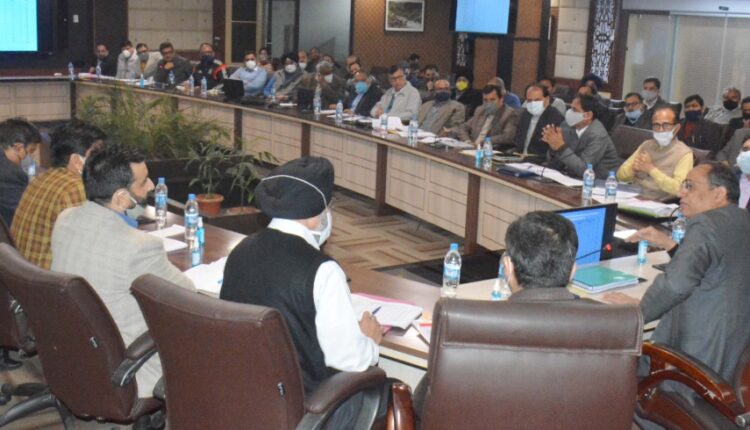 Field staff to be insured for life and injury

Jammu: The Jammu Kashmir Government on Tuesday decided to replace all the wooden poles and barbed wire in Jammu division. It has kept aside a sum of Rs 500 crore for the same.

This was disclosed at a meeting chaired by Principal Secretary, PDD, Rohit Kansal here to review summer preparedness of the department to ensure reliable power supply to Jammu division during summer months.

The Principal Secretary enunciated that safety and welfare of ground level workers is paramount. He said that each human life is valuable and needs to be safeguarded at every cost. He directed to enhance substantially the personal and systematic safety by the department so that happening of accidents are avoided to a larger extent.

The Principal Secretary said that to extend the welfare and well being of its workers Power Development Department (PDD) would insure each of its field worker including DRWs, PDL and TDL persons for life and any possible injuries.

The Principal Secretary asked the officers of JPDCL to ensure that all the transformers wanting repairs should be kept available before the onset of summer months. He exhorted upon them to replace damaged transformers within 24 hours in urban areas and up to 48 hours in rural areas.

He urged them to augment the capacity of their workshops to cater to the needs of daily and additional damages received by the department during the season. He asked them to make best use of time available with them so that the department isprepared to deliver on expected lines during summer.

Kansal further directed the officers to strengthen their grievance redressal mechanism so that people are able to reach to higher officers on real time basis. He advised them to increase their reach on social media like twitter etc so that the necessary complaints reach to them directly. He asked the officers to provide meritorious solutions to public instead of passing the buck. He directed for taking proper note of grievances and directions from LG office so that they are solved and implemented well in time.

Kansal asked them to make necessary procurement of material and labour during these months so that department is readily braced to face the challenge. He asked them to create an ecosystem of efficiency so that every due action follows a systematic path by default.

The Principal Secretary asked them to work for enhancing their capacity to meet the deadlines. He stressed on making the system robust so that every project created gives appropriate result. He asked them to integrate every new asset fully into the system so that outcome is on expected lines. He directed the companies to work in synergy with each other.

The Principal Secretary asked to establish round the clock call centres so that everybody is able to register their complaints with ease and get feedback about them. He asked them to liaise with the IT professionals for realising this objective as per the best practices found anywhere.

Kansal asked the department to expedite the expenditure of funds as the financial year is about to end. He made them aware that future projections would be proportional to the expenditure registered this year. He asked them that their efficiency would be gauged by it. He implored them to create plans with prudence as no midway changes could be made. He asked them to keep in mind all the exigencies and people’s demands while formulating the same.

The Principal Secretary asked the Transmission company to gear up their efforts to deliver the projects well on time. He asked the executing agencies to complete the Grid Stations at Kathua and Samba at the end of March, 2021. He further asked them to complete the transmission works being created for the Jammu-Udhampur-Baramulla railway line expeditiously as per the desire of the Prime Minister is to see it getting completed soon.

The MD, JPDCL informed the meeting that up to the month of April some 1382 transformers would be added to the stock in Jammu division including 85 new transformers. He revealed that their workshops are working in double shifts to repair as many as 200-300 transformers per month. He gave up that if need arises they would increase one more shift to enhance the capacity of their workshops.

The officers informed that tenders have already been floated as per earlier directions so that the requisite performance is registered. They ensured the chair that all the directions would be fully implemented in letter and spirit and department would deliver to the best of the expectations of general public.

Pre-August 5, 2019 status and not mere statehood is our priority; says Mehbooba Mufti