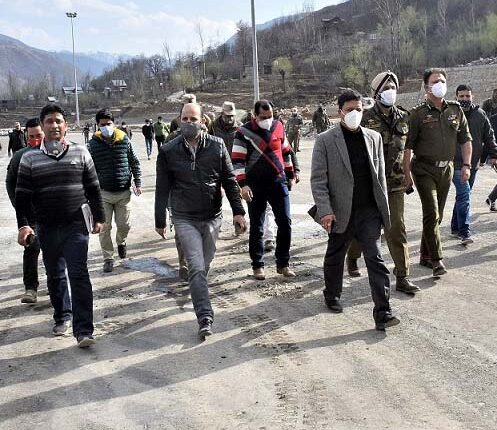 Emphasizing upon the removal of bottlenecks and impediments in the four-laning project, the Divisional Commissioner directed the District Administration and NHAI to work in coordination to complete the project in a time-bound manner.

The Divisional Commissioner also inspected various sites for setting up of holding areas and truck yards, which will be used for stopovers and decongesting traffic on the National Highway. He also took a spot review of various land-sliding areas between Nashri and Banihal stretch.

The Deputy Commissioner and Collector Land Acquisition (ADC) also briefed the Divisional Commissioner about the progress of the land acquisition as well as the status on removal of structures and trees and relocation of towers which are coming in the alignment of NH-44.

The Divisional Commissioner directed District Administration to expedite pending land acquisition for speeding up ongoing construction works. He also advised NHAI to avoid collateral damages to the structures beyond the RoW by erecting protection walls.

The Divisional Commissioner directed the executing agencies to improve and regularly maintain the road for smooth flow of vehicular traffic. He also directed NHAI to macadamize the entire existing stretch of National Highway from Nashri to Banihal to improve its condition.

Earlier, the Divisional Commissioner inspected langer sites at Nashri and directed for early levelling and improvement of the services. He also inspected the relocated sites of shelter sheds and langers en route the National Highway including site at Lamber Banihal which will be relocated from the Shaitani Nallah.

At Lamber, the Divisional Commissioner passed directions for preparing a plan for making fool-proof arrangements for halt of pilgrims. He also reviewed the ongoing works of the Qazigund-Banihal tunnel.

The Divisional Commissioner also reviewed the functioning of the various departments in a meeting held here later in the evening. He specifically sought to-date status of MNREGA works, PMAY, SEHAT, implementation of ICPS & ICDS as well as Covid-19 management measures. He directed the District Administration to achieve the targets in a time-bound manner.