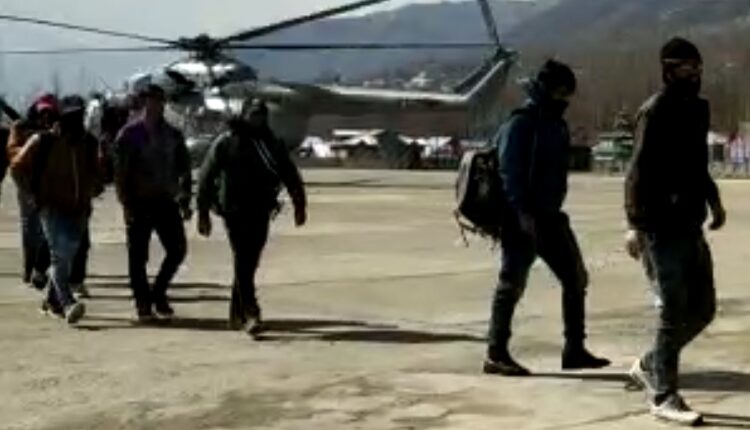 Bandipora:  As many as 178 aspirants appearing in JKSSRB exams were flown to Bandipora by District Administration Bandipora who were stranded in Gurez valley.

As soon as the matter was brought to the notice of district administration regarding the students stranded in Gurez, Deputy Commissioner Bandipora Dr Owais Ahmad personally intervened and took up the matter with Divisional Commissioner, Kashmir and the Army authorities so that special helicopter sorties are arranged to airlift the students.

Despite adverse weather conditions the district administration undertook a herculean exercise of 10 sorties in three days to evacuate stranded students from various parts of Gurez to Bandipora. The entire evacuation process was a coordinated exercise between Civil and Army authorities.

The students were airlifted from three location of Gurez valley in 10 sorties including six sorties from Dawar and two each from Neeru and Baduaab in Tulail.

People of the Gurez especially the students and their parents expressed their gratitude and hailed the timely intervention of DC Bandipora and the entire initiative of evacuation.

Gurez valley remains cut off from the rest of the world owing to heavy snowfall and the only road link between Gurez and Bandipora remains closed  for several months.

However the operations were stopped on Friday owing to heavy snowfall in Gurez due to which 150 aspirants could not be airlifted.

Accordingly, DC Bandipora said, he took up the matter with Divisional Commissioner Kashmir and Chairman, JKSSRB so that a supplementary exam is conducted for the aspirants who missed the exam and consequently JKSSRB yesterday issued a separate exam schedule for the students of snowbound areas who missed the examination.He said the special helicopter service will be resumed with improvement in weather to airlift the remaining stranded students.

Rajouri DC orders removal of hoardings in the town