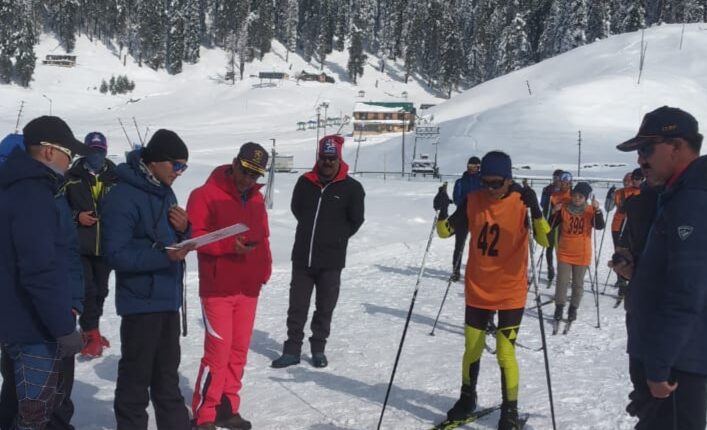 Srinagar: As the weather improved and sunshine blessed the meadows and slopes of Gulmarg on Sunday, Jammu and Kashmir Sports Council conducted several events at different venues throughout the day.

The sports events that were held during the day included Cross Country for Men and Women Senior players, Long distance SnowShoe event for women and girls categories and Ice Stock Sport for both Men and Women categories.

The events that were to be held at Kongdori were initially delayed then finally cancelled as a precautionary measure and for the safety of athletes, the same shall be fixed for next day.

Similarly, due to various reasons such as avalanche blasting in Apharwat ski area and breakdown of cable car till 2:30 PM prevented many athletes from reaching the starting point of the event in time, leading to the postponement of Ski Mountaineering events. These events will be held now tomorrow morning at the same place at 10:30 in the morning, said an official spokesperson of J&K Sports Council.

In the  Nordic game of Cross Country event of 5KMs  for Women, senior group, 30 players participated in which Prince Kumari of AIPSCB bagged Gold Medal, Tsering Ladol from Ladakh got Silver medal and Bhavani TN from Karnataka obtained Bronze medals.

Similarly, in Mens Senior category of the same event, for 10KMs, 30 participants tried their skill, experience and luck but Nyimazangpo, Stanzinlundup and Shubam Parihar, all from ASCB took away Gold, Silver and Bronze medals respectively.

In the early morning event, starting at 4 am, of Team distance for Ice Stock sport of Men’s Senior category, four teams participated in which J&K Team A and J&K Team B got Ist and 2nd positions respectively, while Rajasthan secured 3rd position and Uttar Pradesh got fourth position. In the Women’s category, Ladakh got Ist position, J&K Team A Second, Karnataka Third and Haryana Fourth position.

Rajouri DC orders removal of hoardings in the town