Over 3 lakh appear in JKSSB exams held for 8,575 class IV posts across J&K in 3-phases 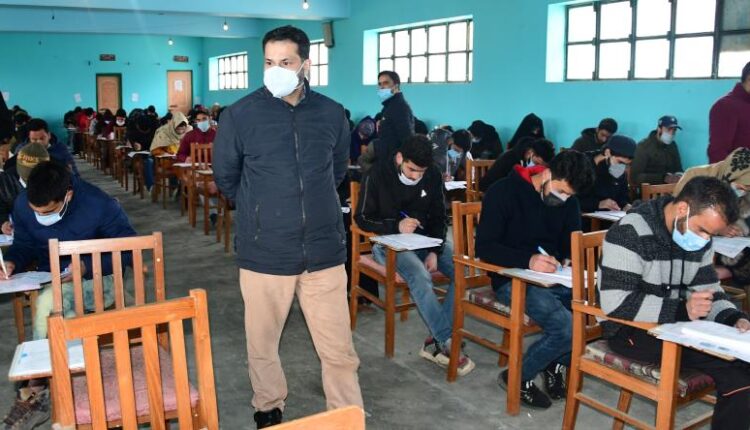 Jammu: An over three lakh candidates appeared in the JKSSB exam held in three phases for 8,575 vacancies across Jammu and Kashmir on February 27-28 and March 1.

A statement issued here by JKSSB further said that the officers/officials deployed for examination duty while exercising extra vigil detected, four cases of unfair means who were found to be in possession of Bluetooth devices/electronic equipment taken in stealthily and four candidates with fabricated / doctored admit cards have also been detected. The JKSSB has decided to debar three candidates found to be using unfair means from participating in the JKSSB examinations for three years.

Further, the statement added that in respect of 04 cases of fabricated / doctored admit cards, the Board is contemplating stringent action against such candidates in due course in pursuance of Section 27(a) of the Jammu & Kashmir Services Selection Board (Conduct of Examination) Regulations, 2013 after completion of necessary formalities.

The candidates found indulging in unfair means were immediately put in isolation and were not allowed to leave the examination centre till completion of the written test. The Board appreciates the efforts and extra vigil exercised by the invigilatory staff and has decided to suitably acknowledge their contribution in strengthening the endeavor of the JKSSB in ensuring fair & transparent conduct of examination, it added.

Adequate security has also been deployed at each Examination Centre by the J&K Police for frisking and maintenance of law and order. Six cases of unfair means have been detected so far against whom stringent action has been taken by J&K SSB.

The Chairman JKSSB complimented the role played by all the Deputy Commissioners, SSPs, Staff of JKSSB and of other line departments like School Education, Higher Education, Jal Shakti, Power Development Department, Housing & Urban Development Department and Private Educational Institutions for their support and cooperation for the smooth conduct of examination.