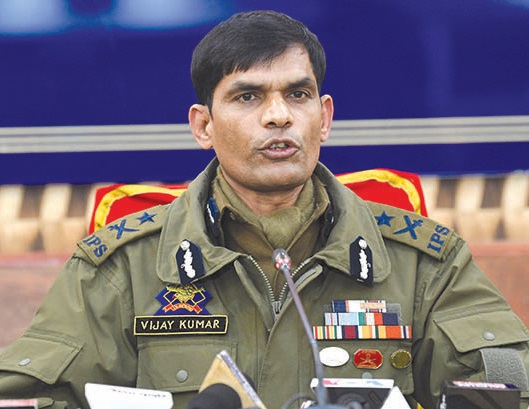 Srinagar: Inspector General of Police, Kashmir Zone, Vijay Kumar on Wednesday claimed to have pre-empted two major militant strikes in south Kashmir even as he termed the killing of Al-Badr chief as major success for security establishment.

Addressing a press conference here, the top police officer of Kashmir also announced that stone pelting would not be allowed at any cost and declared that 15 of the 39 youth arrested in connection with the last Friday’s incident at Nowhatta here are being booked under Public Safety Act, the legislation described as “lawless law” by the Amnesty International.

Referring to the killing of Gani Khawja at Tujjar Sopore late Tuesday evening, the IGP said Sopore police had received an input and later informed army and CRPF. The police, he said, reached the spot first and soon there was firing from inside. While two militants escaped when cordon-and-search-operation was started, he said, Gani Khawja was killed in the encounter joined by army and CRPF personnel later.

He said that Khawaja’s killing is a major success for the security establishment. A resident of Khawaja Mohalla Kralgund in Kupwara, the top militant had gone to Pakistan in 2000 for arms training and returned in 2002, he said.

Regarding “pre-empting” IED blasts by militants in south Kashmir, the IGP said that one was about carrying out a vehicle-based IED blast by four persons, mostly “radicalized” through social media.

“One Sahil Nazir of Pampore, a BA first-year student, was motivated through Telegram.

He revealed that he had bought an old vehicle (JK01E-0690) to be fitted with explosives being brought from north Kashmir,” he said. “Awantipora police also arrested his other associates including Kaiser Ahmad from Pampore, Mohammad Fayaz and Yasir Ahmad Wani.”

Sahil Nazir, he said, also gave a confessional statement which has properly recorded that he also carried out a grenade attack on CRPF at Pampore on January 25.

“IED was to be received from north Kashmir and now that he has been arrested it would come but we are after the OGW who was supposed to hand it over.”

In another preventive incident, he said, militants were planning to carry out major blast at MC building Awantipora at the behest of one Omar Khanday , who joined LeT militant outfit in October 2020 and killed two policemen at Baghat Chowk.

“We arrested one Musaib Ahmad Gojri of Nalbal Pampore and upon interrogation he revealed that there is a container containing ammonia power 25 kg at his home. He also revealed name of two more associates, Muneeb Mushtaq Sheikh and Shahid Ahmad Shah,” he said, “later we recovered the material from his home. They also revealed that other parts required for making the bomb were to come from north Kashmir.”

He said that in both cases, seven people have been arrested and hailed Awantipora police for preventive action.

Regarding sticky bombs, he said “there is information that sticky bombs have arrived in Kashmir but it has not been recovered so far.”

“We have changed SOP and alerted all forces. I personally informed concerned at airport and also appeal people to share information.”