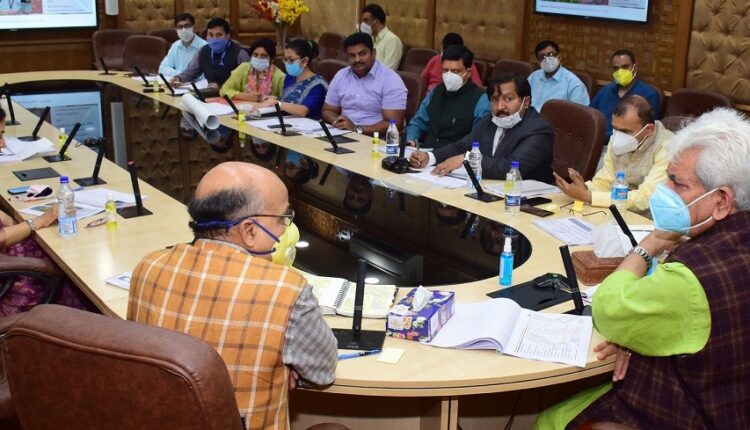 Jammu: Lieutenant Governor, Manoj Sinha on Wednesday chaired a high-level meeting to review the progress being made on the prestigious Jammu and Srinagar Smart City Projects.

During the review meeting, the Lt Governor asked the concerned functionaries to make a visible impact while working with high professionalism and clear vision.

Laying special emphasis on accelerating the approval of DPRs and tender allotment process, the Lt Governor directed CEOs of Jammu Smart City Limited (JSCL) and Srinagar Smart City Limited (SSCL) for constituting a technical committee for early vetting of DPRs of the projects.

Directions were also issued to reduce the completion time of projects by taking up multiple works simultaneously.

The Lt Governor called for putting dedicated focus on improving infrastructure & services, increasing mobility and enhancing the administrative efficiency, besides maintaining inter-departmental coordination to transform Jammu and Srinagar into modern and sustainable cities.

While reviewing the progress on installation of Advertisement Panels, the Lt Governor observed that communication and feedback is the highest priority of Administration and directed the officers for engaging in continuous communication with the public.

While reviewing the Smart Poles project under Jammu Smart City Limited, the Lt Governor directed CEO JSCL for keeping a feature for expansion in scale of the project in future.

The Lt Governor also reviewed the improvement of road network component of the Jammu Smart City Projects and directed for completing the survey at the earliest. He asked the concerned officers to give due care and attention to reducing inconvenience to the public while executing the work.

Dr. Shahid Iqbal Choudhary gave a detailed overview of the number of completed and ongoing projects along with expected date of completion. It was informed that ICCC in Srinagar would be ready for soft live by 31 March.  Photos of Variable Message Displays (VMDs), Digital Libraries, Intelligent Traffic Management System, Junction improvements, beautification of Historic places, and development of footpaths, besides scores of completed and ongoing projects were also shown through PowerPoint presentation.