Lt Governor releases D.P Srivastava’s “Forgotten Kashmir: The Other Side of the Line of Control” 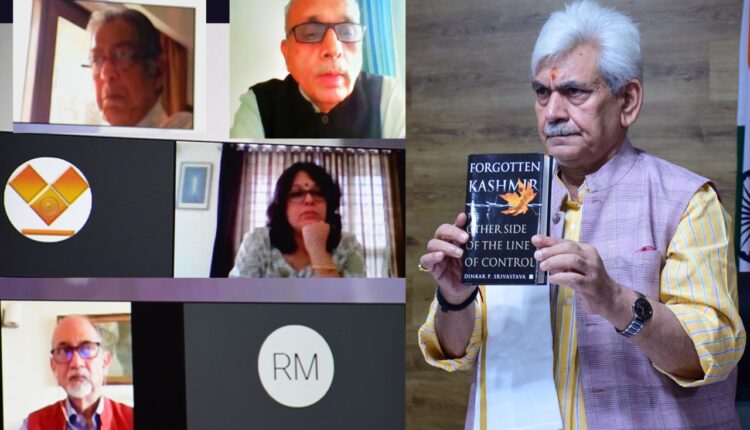 Jammu: Lieutenant Governor, Manoj Sinha on Thursday released a book titled “Forgotten Kashmir: The Other Side of the Line of Control” authored by Dinkar P. Srivastava.

The Lt Governor also addressed a webinar of Vivekananda International Foundation on the occasion.

Speaking on the occasion, the Lt Governor appreciated the author for unmasking Pakistan’s conspiracy and atrocities on the people of Pakistan-Occupied Jammu & Kashmir (PoJK) over the past seven decades through his book, and creating a better understanding of Pakistan’s motivations for its policies in the region.

The book is well researched and documented , based on facts and experience of the author, bringing into light various important aspects of ‘tribal’ invasion in 1947-48, the Sudhan revolt in the 1950s, the Ayub era, the Simla Agreement, the adoption of an ‘Interim Constitution of 1974’ and the China-Pakistan Economic Corridor (CPEC). The book also mentioned the Pakistani Army Officer who himself spoke about the evil designs of Pakistan, said the Lt Governor.

The Lt Governor commended the contributions of Dinkar P. Srivastava, who is a seasoned diplomat, on foreign diplomacy front. He also made a special mention of the author for his involvement in the Jammu and Kashmir issue at the Ministry of External Affairs, and discussions in the United Nations.

Home Minister of India, Amit Shah, on the floors of Parliament has cleared India’s stand on the PoJK. Indian Foreign Ministry has also warned Pakistan against any demographic change in the region, maintained the Lt Governor.

The Lt Governor also spoke on the Black Day observed on October 22 in J&K, where a two-day National Symposium and Exhibition on the “Memories of October 22, 1947”in collaboration with the National Museum of History, Art, Conservation and Museology was organized in Srinagar to educate the young generation of Jammu and Kashmir about the atrocities of Pakistan.

During the curtain raiser event of “Azaadi Ka Amrut Mahotsav” celebrations on  March 12, I visited the birthplace of Brigadier Rajinder Singh and paid tributes to the first recipient of Maha Vir Chakra, who along with his soldiers, despite being heavily outnumbered, displayed tremendous courage while successfully keeping the enemy at bay, said the Lt Governor.

Speaking on various reformative measures being taken for the development of the UT, the Lt Governor observed that J&K is witnessing a wave of positive change in the last 18 months and a determined push is being given to socio-economic development, besides empowering the common people.  Hundreds of laws and policies hampering the development of the region have been done away with, or modified.

For the last seven decades, J&K has been kept away from prosperity and development despite being getting more per capita budget than other states. Since, August 5, 2019, with the efforts and resolve of  Prime Minister Narendra Modi Ji, J&K has been fully integrated into the mainstream of the nation, the Lt Governor maintained.

Now, the development process in J&K has been accelerated. Soon, the population living in 973 villages will be connected with paved roads for the first time after independence, and remote villages would see 20-22 hours of electricity in the next three-four years, said the Lt Governor.

While speaking on the importance of empowered grass-root democratic setup, the Lt Governor said that the three-tier Panchayati Raj System was established and peaceful, violence-free and fair elections were held for the District Development Councils for the first time in J&K.

The Lt Governor observed that the UT Government is nurturing transparency and accountability at all levels of the Administration. Issues and developmental aspirations of the people living in rural areas are one of the focus areas of the government, he added.

Reforms have been made in making public grievance redressal mechanisms more robust and responsive. LG’s Mulaqaat- Live Public Grievance Hearing is being held every month where I interact with the people and take first hand appraisal of their grievances, said the Lt Governor.

In his concluding remarks, the Lt Governor conveyed his best wishes to the author for his book.