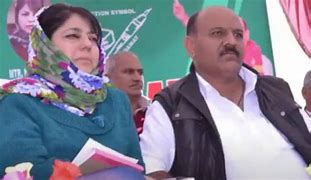 After the resignation of Dhaman Bhasin and Ved Mahajan, both former legislators, apart from ex-MP Trilok Singh Bajwa over Mehbooba Mufti’s remarks on the Tricolour, Surinder Choudhary was the only prominent Hindu face left in the party, in the Jammu region.

Choudhary was behind the victory of PDP nominee Dr Manohar Singh in the predominantly Hindu inhabited Nowshera constituency during the recent District Development Council polls ensuring the BJP’s defeat in the area from where Jammu and Kashmir BJP president Ravinder Raina was elected to the Legislative Assembly in 2014.

Announcing his resignation from the party along with other leaders including councillors in Nowshera Municipal Committee, panches and sarpanches, Choudhary accused the present party leadership of having drifted from the agenda of party founder and former chief minister Mufti Mohammad Sayeed, who always used to say “Na grenade na goli se, baat banegi boli se“.