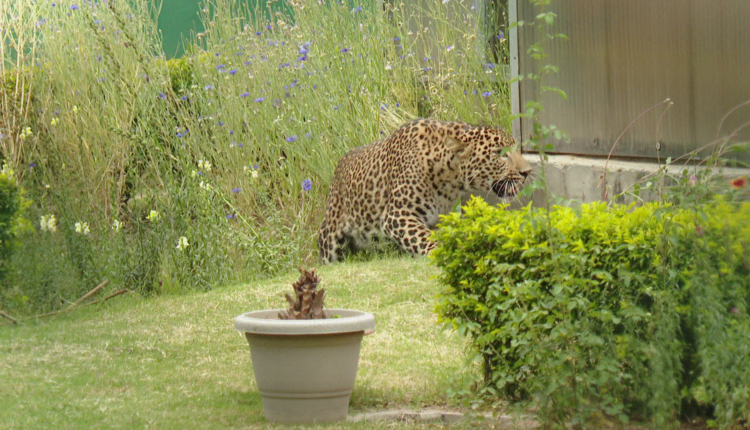 The injured Wildlife officials have been identified as veterinary doctor Dr Rajinder Katoch, animal keeper Dilawar Khan. The civilian included Ganga Ram, who dealing in the manufacture of name plates nearby. The injured were rushed to hospital.

After persistent efforts for nearly three hours, wildlife officials succeeded in capturing the leopard around 2.30 pm in a public park near the bungalow of former minister and National Conference’s provincial president Devender Rana. However, in the process, three people including two wildlife officials got injured.

The sighting of leopard triggered panic in posh Gandhi Nagar area which is inhabited by rich, powerful and influential people including politicians and bureaucrats. Significantly, the areas around Gandhi Nagar are also densely populated having Jammu Kashmir police headquarters, Jammu University and Railway Station as well.

According to Wildlife Warden, Jammu, Anil Atri,    the animal appears to have come from nearby Bahu forest range.

It was first spotted by a local resident on the CCTV camera of his house who called police in the morning. The latter in turn contacted the wildlife department around 7 am saying that a leopard has been sighted in the residential area.

The wildlife officials immediately reached there, but the animal had disappeared by then.

The leopard was spotted again by around 11 am and the officials took nearly three hours to tranquillise it. However, in the process, it attacked and injured three people who were later rushed to the hospital.

Atri said that they will take the animal to the Manda zoo and from there, it will be rehabilitated in the forest area.

However, in the evening, wildlife officials were again on their toes following reports abouting the sighting of a leopard in Bahu area. However, despite efforts, the animal could not be traced. The leopard, according to locals, was an adult one.

DDC chairpersons protocol made equivalent to Mayors in J&K