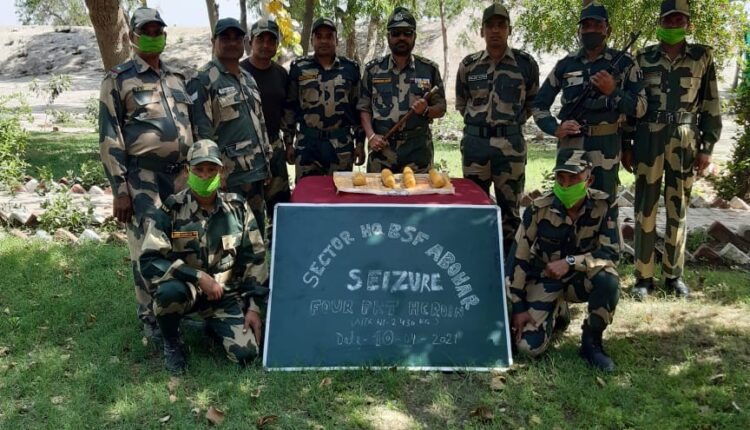 Ferozepur: Alert BSF troops of 124 Bn seized four kg of heroin worth Rs 20 crore from the Abohar Sector in Punjab.

In Abohar, seizure took place during the early hours when the BSF troops heard some suspicious sound and got alert, BSF said.

Later, they observed some suspicious movement following which they challenged the suspected smugglers from Pakistan, the officials said.

To prevent any misadventure by the smugglers, the BSF troops opened fire in their direction but they managed to escape taking advantage of dense fog and undulating ground, the officials said.

Later, during the search operation carried out by the BSF troops, eight packets of heroin (approximately 4 Kg) were recovered from an area ahead of fencing in the Abohar sector, they said.

In February this year also, BSF had seized heroin worth Rs 2.5 crore from the International Border in Abohar sector.

Officials said that anti-national elements have been trying to find new trends of smuggling, but attentive bordermen determinedly defeating all such attempts.

The 11th round of Corps Commander-level talks between India and China lasted for around 13 hours yesterday and concluded at 11:30 PM. Both sides discussed disengagement from remaining friction points. Sources