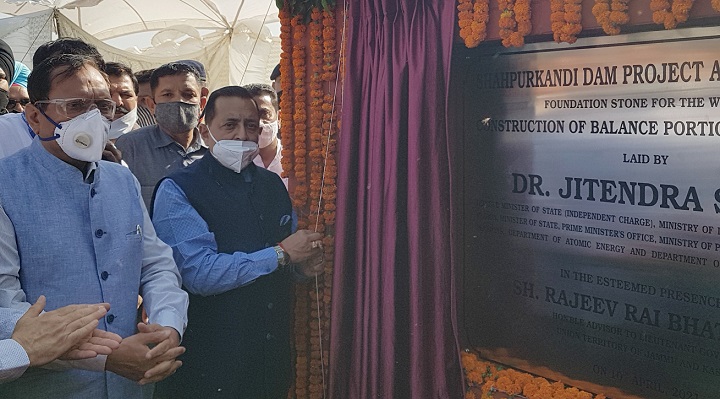 Kathua, Samba to get 1150 cusecs water through Ravi Canal by November 2022

Kathua: Union Minister of State (Independent Charge) for the Ministry of Development of North Eastern Region and Minister of State for Prime Minister’s Office, Dr Jitendra Singh laid foundation stone for the work of construction of remaining portion of Ravi Canal near Basantpur, Kathua today.

Speaking on the occasion, Dr Jitendra Singh said Government of India is constructing Shahpurkandi dam Project in a mission mode with an aim to utilize full water of Ravi River in Indian Territory. Almost 63% work of Main Dam has been completed and, on its completion, Shahpurkandi Dam Project shall provide intensive irrigation facilities in 32173 Hectares area falling in the districts of Kathua and Samba, Dr Singh added.

Expressing hope to start the filling of the reservoir of Shahpurkandi Dam Project by November 2022, Dr. Jitendra Singh said that the project will hopefully start giving water through gravity to J&K through Ravi canal, which shall help in uplifting socio-economic status of the people of the region. It will also create tourism potential besides improving the irrigation water availability scenario in Kandi and border areas of twin districts of Kathua and Samba.

The Forest clearance for areas falling in Punjab and J&K has been obtained from MOEF, New Delhi last year and Wildlife clearance has also been obtained recently from National Wildlife Board for area falling on J& K side, he added.

Speaking on the occasion, Advisor to Lieutenant Governor, Rajeev Rai Bhatnagar, said with completion of Ravi canal project a major part of the kandi areas of Kathua and Samba districts will be benefitted. He said that the UT Government headed by Lieutenant Governor, Manoj Sinha is taking steps to empower PRIs to ensure developmental pace in Jammu and Kashmir will take a fillip. He also appealed to people to adhere to the covid guidelines issued by the government as the country is undergoing the second wave of CoronaVirus.

DDC Chairperson, Mahan Singh and Vice Chairperson Raghunandan Singh appreciated Government of India for taking up the initiative of constructing Ravi Canal besides getting due share of water from Ravi River which will help to irrigate thousands of hectares of un irrigated land of Jammu and Kashmir.

Chief Engineer, Shahpurkandi Dam Project, S K Salute informed that the work on Shahpurkandi Dam Project was halted due to unprecedented nationwide lockdown imposed to contain the spread of the COVID-19 pandemic. The work of the project is going on in full swing and the work of construction of Main Dam falling in J&K side has also been started from Punjab side, informed.
He further stated that all works on J&K side as per schedule shall be completed well before the filling of the reservoir proposed to be carried out in November,2022.

Pertinently the Shahpurkandi Dam Project is a National Project and involves the interest of the state of Punjab and Union Territory of J&K in terms of power and irrigation. The sharing of water of the Ravi River and the share of power is as per the bilateral agreement of 1979 and further ratified in 2018 between the two States.

The Project is being constructed on River Ravi 11 Km downstream of Ranjit Sagar Dam and 8 Km upstream of Madhopur Headworks in Pathankot District.

A Tiffin Improvised Explosive Device (IED) is unearthed by 53rd Battalion ITBP near a road in Kurushnar, Narayanpur, Chhattisgarh today.