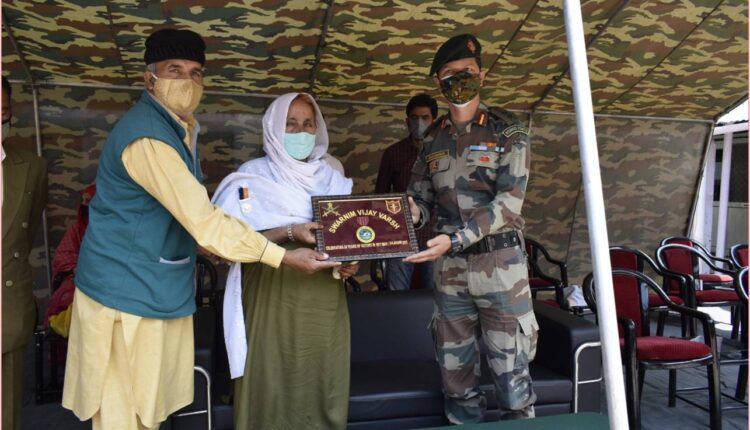 Jammu: Swarnim Vijay Varsh is being celebrated this year to commemorate the lightning victory of the nation over Pakistan in 1971. The Victory Flame marking the occasion was received by Counter Insurgency Force Romeo. During its journey it shall traverse the Districts of Rajouri, Poonch and Reasi where the Force has continued the legacy of 1971 by decisively defeating the Pakistan sponsored proxy war and restoring normalcy.

Today, the Flame was consecrated at Thanamandi with a wreath laying ceremony and two minutes silence in homage to our martyrs. The event was graced by Smt Sardar Begum, Veer Nari of Lance Naik Malik Mohd Iqbal, who was posthumously awarded the Veer Chakra for gallantry in Gurez sector. Mohd Iqbal attained martyrdom when he charged at an enemy mortar post and put it out of action. Two other veterans, Hony Capt Mohd Bashir and Sub Abdul Rashid were also felicitated on the occasion. The event infused the attendees with renewed patriotism as cries of Bharat Mata Ki Jai and Shaheed Lance Naik Mohd Iqbal ki Jai rent the air.

124-year-old Rehtee Begum from Shrakwara Block Wagoora in Baramulla gets her first COVID-19 vaccine jab as part of the door to door vaccination campaign: Department of Information and Public Relations, Jammu & Kashmir