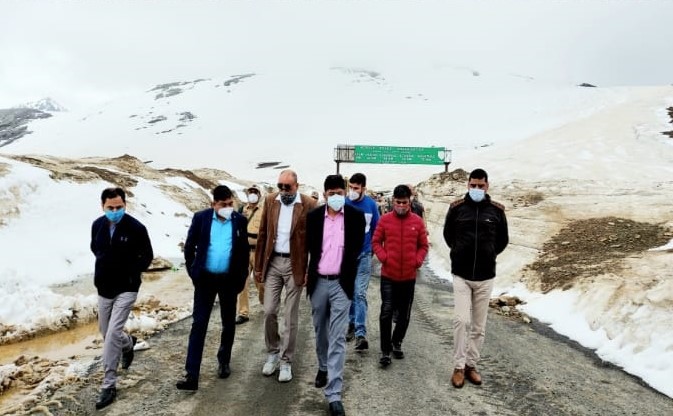 Pitches for promotion of tourism, winter sports in the mountainous district; Meets scores of public delegations

He inspected the maintenance of road work on Sinthan Top, situated at a height of 12300 feet on National Highway (NH 244) and directed the NHIDCL authorities to expedite the pace of ongoing maintenance work to ensure the timely road connectivity to the area.

The General Manager NHIDCL apprised the Div Com about the the progress in the  maintenance of Sinthan  road and informed that the NHIDCL is making all out efforts to restore the connectivity to the area.

Earlier, Div Com visited Sub Division Paddar and inspected the ongoing Developmental Projects/works in the area, besides holding an interactive meeting with the PRI members, including sarpanches and panches .

Discussion was held by the Div Com with all stakeholders regarding the preparatory works for the upcoming Mata Machail Yatra. DC Kishtwar was directed to submit a full action plan in this regard based on the requirement of Yatris.

The Div Com inspected the TRC building at Gulabgarh, the work on which has recently been completed.

He directed CEO KDA to tap the tourism potential of the Paddar and Sinthan-Chatroo area by establishing the robust tourism infrastructure, developing adventure tourism, sustainable tourist destinations, tapping unexplored tourist spots and here by promoting tourism sector in the area.

He stressed on promotion of winter sports including skiing adding that the snow clad landscape at Sinthan top is best suited for winter sports.

He asked the district administration to take concrete steps for development and promotion of potential tourist destinations by creating adequate tourism infrastructure and human resources, while involving all stakeholders.

He directed the executing agencies to expedite the pace of work so that these projects are completed in a time bound manner.

The Div Com gave a patient hearing and assured  redressal of their genuine demands in a time bound manner. He passed a slew of directions to the concerned officers for immediate redress of grievances and asked DC Kishtwar for proper follow up. He also directed the District administration to work in collective and responsible manner for redressing the issues of the people.

He directed them to pace up the speed of work to ensure the timely completion of these projects and also to follow the COVID related SOPs at work places.

The tour programme concluded with visit to the District Hospital Kishtwar wherein Medical Superintendent briefed the Divisional Commissioner regarding the COVID isolation and ICU facility besides upcoming 100 bedded additional block of the DH. The Div Com inspected the newly constructed Plant room and assured that a dedicated Oxygen Generation Plant shall be shortly installed at the district hospital.