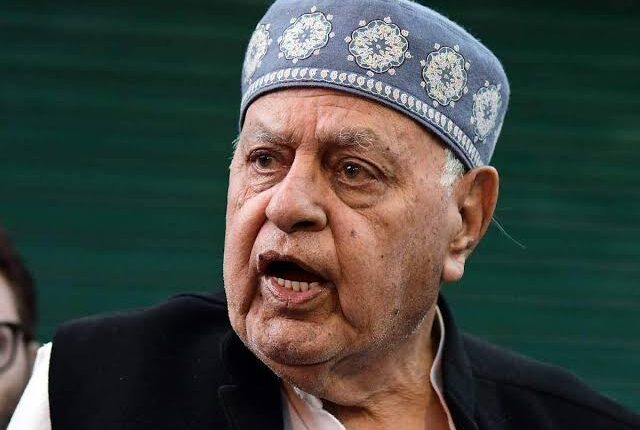 Srinagar: National Conference president and Member of Parliament from Srinagar on Thursday said the party will continue to strive for restoration of Artcke 379, 35 A and statehood to Jammu and Kashmir.

The entire region is at a breaking point due to the aftermath of the august 5 measures, predatory effects of the Covid-19 induced crises and the ravaging impact of severe weather conditions on horticulture and allied sectors, he said while interacting with party’s provincial functionaries through virtual mode both in Jammu and Kashmir divisions.

. “People of the state are caught in a deadly quagmire of economic and political uncertainty. Administrative unaccountability and development stagnation have become the norm of the day. The mislaid rules, regulations, and off-hand orders have put Jammu, Kashmir, and Ladakh on the path of terminal alienation,’’ he said.

Pointing out that youth are facing the major brunt of the unconcerned attitude of the incumbent government, Abdullah said that “nobody other than us in the National Conference can realize the amount of beleagurement; Jammu and Kashmir has suffered at the hands of the present ruling regime, since it was the National Conference which had firmly established the state on democratic and constitutional foundations”.

The seeds of an empowered Jammu, Kashmir and Ladakh were sown by us,” he said adding “Being fashioned in the heroic mould of Sher-e-Kashmir, we won’t give in on the peaceful and constitutional struggle for the restoration of our rights,” he said. “Our priority will remain the restoration of Statehood and restoration of Articles 370, 35-A,” he added Pintu following out that the idea of fostering peace, prosperity and development in J&K is elusive until people’s infringed constitutional rights aren’t restored.

“There can be no trade off between the political aspirations of the people and development; both have to go hand in hand. There is no shift in our party agenda on serving people, and protecting the unique political and cultural identity of Jammu and Kashmir,” he said.

“We haven’t changed our stance on the measures of August 5. We haven’t relinquished our peaceful, constitutional, and non violent battle for the restoration of our constitutional rights. We will fight prudently. Our agenda based on integrity and service remains unchanged as well.