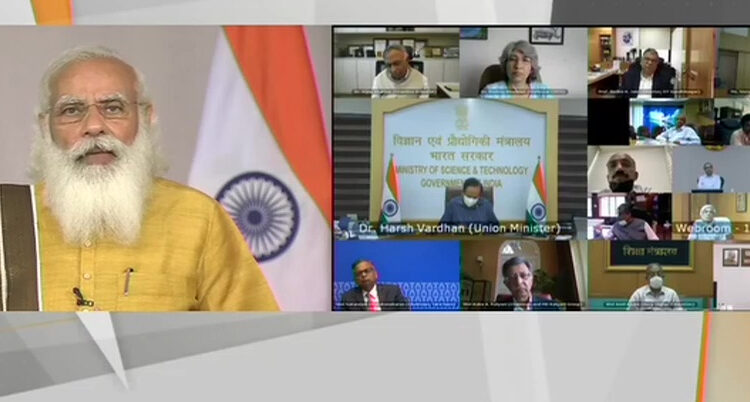 NEW DELHI: India is leading the world in the fields of sustainable development and clean energy while it aspires to become self-reliant in every direction including agriculture to astronomy, disaster management to defence technology and vaccine to virtual reality, Prime Minister Narendra Modi said here on Friday.
PM Modi’s remarks came at a meeting of the CSIR Society chaired by him through video conferencing today.
“From agriculture to astronomy, disaster management to defence technology, vaccine to virtual reality, India aspires to become self-reliant and empowered in every direction. India is leading world in fields of sustainable development and clean energy,” said PM Modi at the CSIR society meeting.
He further stated that the Council of Scientific and Industrial Research (CSIR) works as an institutional arrangement to maintain system for science, society and industry in our country.
The Prime Miniter said, “CSIR works as institutional arrangement to maintain system for science, society and industry in our country. This institution of ours has produced several talented scientists. Great scientist like Shanti Swaroop Bhatnagar has led this institution.”
He also stated that the COVID-19 pandemic is one of the biggest challenges of the century in front of the world, but history is a witness of the fact that whenever a big threat has been posed to humanity, science has always helped in fighting such situations and have created paths for a better furture.
“Finding solutions and possibilities in times of crisis and coming up with new power is the basic nature of science. Over centuries, this has been done by the scientists of India and the world, and even today they are doing this work. To bring an idea in the form of theory, to do it practically in a lab and then dedicating it to the society through implementation. The speed and scale at which this work has been done by our scientists in the last 1.5 years is visible,” said the Prime Minister while addressing the meeting.
To pull humanity out of such a big epidemic, our scientists made vaccine within an year and made them avaialble to the people, he added.
Union Ministers Nirmala Sitharaman, Piyush Goyal and Harsh Vardhan, Principal Scientific Advisor K. Vijay Raghavan and CSIR DG Shekhar C Mande were also present at the meeting. (AGENCY)

#LADAKH | LG R.K Mathur e-inaugurated distribution of educational tablets under #YounTab Scheme today. LG appreciated the bright students of Ladakh for raising the issue and striving to seek a solution.