We care: Bridging the Pir Panjal 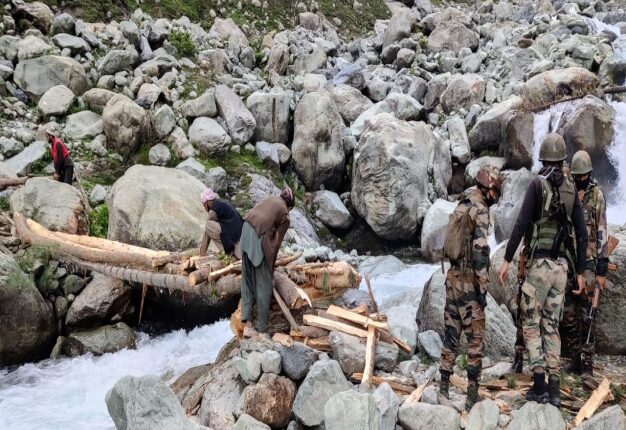 Jammu: The Indian Army has once again stood with solidarity with the local AWAM of Jammu and Kashmir by rendering selfless service to the needy locals during challenging times.

The troops deployed at Satharban in District Rajouri (J&K) found out that a Foot Bridge over the Jamian Nala had been washed away due to incessant rains during the intervening night. The Bridge was used by the nomadic Gujjars and Bakarwals to cross fast flowing Jamian Nala during their annual from plains to highland pastures in Pir Panjal mountains during summer.

Eight such families with approximately 1500 livestock were stuck on their way to the Pir Panjal in Rajouri district due to washing away of the foot bridge.

Battling inclement weather, torrential downpours and freezing temperatures at an altitude of over 9,000 ft, an Indian Army unit swiftly got into action and constructed a 30 feet bridge in record time. The nomadic families were seen off at the bridge by the troops who wore a smile of gratitude for the Indian Army.

“Keeping the safety and security of our students on priority, NIOS cancels #Class12Exams. Students will be evaluated based on objective criteria to be announced soon. This will benefit around 1.75 Lakhs students”: Education Minister Ramesh Pokhriyal Nishank