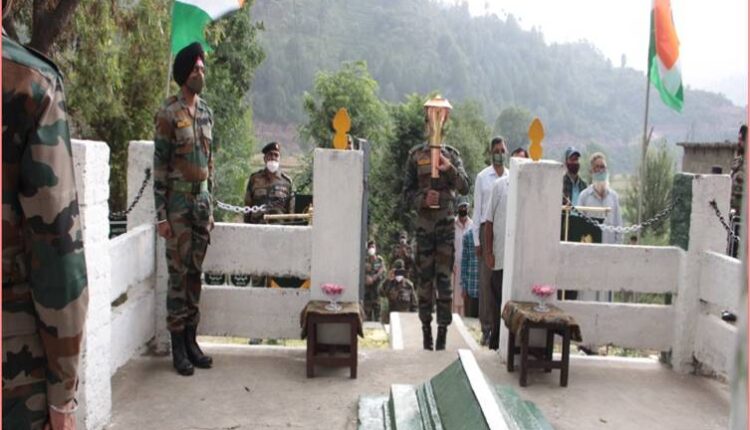 Jammu: Indian Army is commemorating 50 years of 1971 war as “Swarnim Vijay Varsh”. Romeo Force has played a pivotal role in fighting terrorism in the Districts of Rajouri, Poonch and Reasi since year 1999. It’s relentless anti terror efforts have ushered in stability peace and prosperity in the area. While preparing for SwarnimVijay Varsh, the Territoral Army unit of Romeo Force came across a tomb of 1971 war hero in general area of Manhot, Mendhar. The tomb is of Maj Mahmood Hasan Khan, VrC, 14 GRENADIERS. Who was martyred in 1971 war and was awarded Vir Chakra posthumously. The gallant officer who was commanding a company of 14 GRENADIERS, who successfully conducted raid at a heavily guarded objective in attain. For his gallant action, leadership skills and supreme sacrifice to the call of duty, the officer was awarded with the prestigious Vir Chakra.  It is pertinent to mention that the tomb of this brave soldier was a forgotten chapter which has have been revived by the Territorial Army Company of Romeo Force located at Mankote.

As a mark of respect, a solemn Wreath Laying Ceremony was organized at tomb of Major MH Khan, VrC for felicitating the fallen war hero of 1971. Territorial Army Battalion along with local Rashtriya Rifles Battalion under Romeo Force paid homage to the gallant soldier who made the supreme sacrifice for his motherland. A two minute silence was observed by the gathering as a heartfelt tribute to the martyr for his steely resolve in defending this great nation.