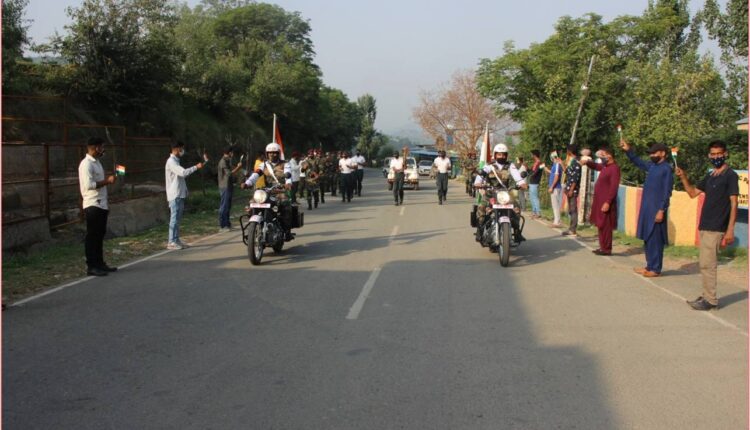 Jammu: Romeo Force has been at forefront of the nation’s fight against Pakistan backed terrorists since its raising in 2001 and has continued the legacy of 1971 by decisively winning the Pakistan sponsored proxy war against India in areas of Rajouri, Poonch and Reasi districts. General Officer Commanding, Romeo Force graced the solemn and impressive ceremony at Palma in District Rajouri (J&K), to commemorate the Golden Jubilee of the victory achieved in the 1971 Indo- Pak War. Rich tributes to the valiant soldiers of the Armed Forces who made the supreme sacrifice during the war were paid by the General Officer Commanding and all ranks of Romeo Force.

Fifty years ago, over 93,000 Pakistani soldiers under Lt Gen AAK Niazi surrendered unconditionally to the Indian Armed Forces and declaration of the cease-fire was brought into force ending the fourteen days Indo-Pak War. This resulted in liberation of East Pakistan and creation of the sovereign nation of Bangladesh.

GOC, Romeo Force while interacting with all present, dwelled upon achievements of the Armed Forces in various battles including fighting the proxy war. He emphasized that Indian Army has always performed with utmost professionalism, upholding the highest traditions of velour and devotion to duty while maintaining sovereignty of the country. He also mentioned the supreme sacrifices rendered by the soldiers in Indo-Pak war and expressed gratitude to the contributions of populace Rajouri, Poonch and Reasi districts who have played a pivotal role in all wars fought by independent India as also for maintaining the peace, harmony and tranquility in the region in the recent insurgency affecting the region. He also exhorted that Indian Army is geared up to fight the battle against prevailing COVID-19 pandemic in close co-operation with the locals.

On the occasion, a welcome run was organised by paratroopers of Special Forces followed by wreath laying ceremony at Force War Memorial.

A grenade has been hurled by terrorists at main bus stand in Tral, Pulwama which exploded in the air causing minor injuries to 6-7 civilians. The injured have been given first aid at a hospital. The area has been cordoned off & a search is underway.