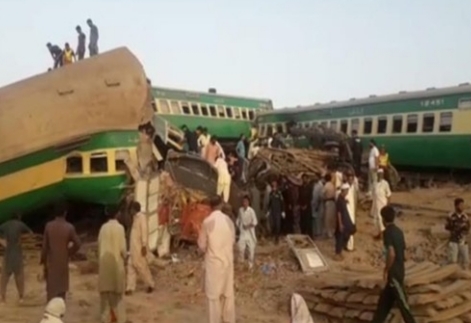 SINDH [PAKISTAN]: At least 30 people died and several sustained injuries in the Ghotki district of Pakistan’s Sindh province after two trains collided with each other.
Sir Syed Express train rammed into Millat Express between Reti and Daharki railway stations in Ghotki, ARY News reported on Monday.
The accident occurred when a Sargodha-bound Syed Express collided with a Millat Express that was already present at the track after the derailment, according to the railways’ officials.
According to the local police officials, several people are still trapped in the bogies of both trains. Moreover, the police and rescue teams reached the spot for the rescue operation as the up and down railway traffic has been suspended.
Heavy machinery and cutters are required for the operation, said Deputy Commissioner Usman Abdullah.
In March this year, Lahore-bound Karachi Express had derailed in Pakistan’s Sindh province.
Later, a probe launched under the federal government inspector of railways (FGIR) had blamed the “poor condition of the track” for the accident in which a woman was killed and 13 others sustained injuries. (AGENCY)

21 killed in Yemen explosion Yemen :- At least 21 people were killed in a massive explosion in Yemen .Prime Minister Maeen Abdulmalik Saeed said that the explosion at a gas station in the central city of Marib was the result of a missile and a drone attack by Houthi rebels

The price of petrol & diesel in Delhi is at Rs 93.31 per litre and Rs 86.22 per litre respectively today