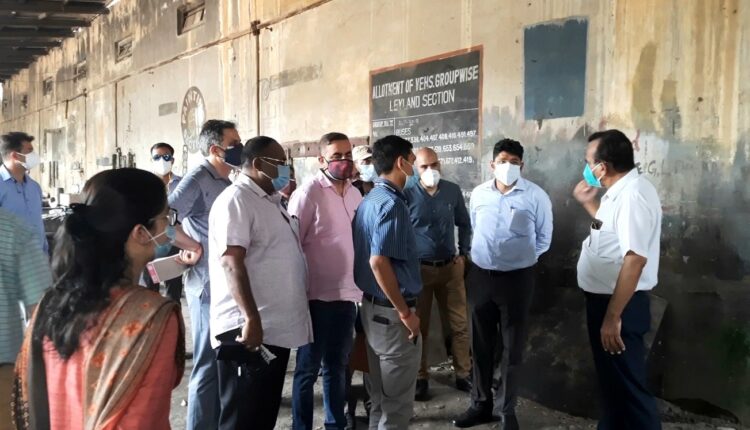 He was on a visit to the site of the Railway station which was built in 1897 but was abandoned after the partition as the railway link to Sialkot was broken. The Div Com assessed the renovation requirements and issued instructions for starting the preliminary work to materialize the restoration plan.

“Development of new attractions and up-gradation and improvement of the existing infrastructure for promotion of tourism is one of the priority sectors of the government”, the Div Com said.

During the visit, the Div Com along with other officers took a round of various blocks of the heritage station and observed that different landmarks and remnants are still available at the site. He said the railway station has a historical and heritage significance and extraordinary efforts should be made for restoring its past grandeur. He said that the refurbishment of the railway station would add another dimension to the Heritage Tourism in Jammu and Kashmir.

He directed the concerned officers to go through the pictures available of the historic railway station as it had existed earlier, so that it is restored to its pristine glory.

Pertinently, the old Jammu railway station was on the Jammu Sialkot Line which had train services from Jammu to Sialkot (vice-versa) by passing through R S Pura, Miran Sahib and Suchetgarh.

The Divisional Commissioner directed the Tehsildar South and JDA to conduct a demarcation exercise and submit complete report along with survey numbers involved, land titleship and other revenue details of the site. He also directed the concerned to take drone shots of the station and mark the buildings, area which could be renovated.

The public representatives apprised the Div Com that the land belonging to the Railways Department of the erstwhile state was supposedly transferred to the Transport department in 1954 and presently the yard and workshop of JKRTC is located there.

Spoke to DC Reasi, S. Charandeep Singh and inquired about the fire that broke out near the #VaishnoDevi shrine some time back. Thankfully, everything brought under control. No major loss reported. However, keeping a close track for the next few hours: Dr Jitendra Singh