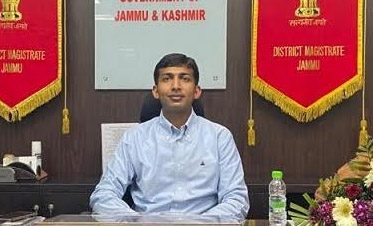 JAMMU: Deputy Commissioner Anshul Garg today said that the positivity rate of the Covid-19 cases has dropped to nearly 2%, while the recovery rate has crossed 92% in Jammu district.
Briefing the media here, the Deputy Commissioner said that recoveries continue to outnumber the daily new cases and the decreasing trend in positive cases continues. He informed that as recovery rate is better than rate of new active cases, the bed capacity has been reduced to 170 patients in GMC.
The Deputy Commissioner also said that three thousand people in 45+ and Divyang category have registered themselves in an online survey for vaccination in Jammu district, and they will be inoculated at their door steps.
He also informed that 5 vaccination sites have been designated for the second dose and 3 sites are available for the first dose. He urged people to make online slot booking and get vaccinated.
The Deputy Commissioner said that under Covid morality survey SAKSHAM, 70 families have been identified so far who will be provided with pension/scholarships after the verification procedure is completed.
The Deputy Commissioner also informed that the District Administration has distributed 70 thousand quintals to the beneficiaries for the month of May and five thousand quintals so far in the month of June under PMGKAY.
“To provide continuous services to the people at their door steps, District Administration has launched four new online services including certificate for SC/ST, Legal Heir and certificate for Dependent” he said. He also informed that village level camps have also been started in which Sehat card enrollment and routine revenue services will be provided to the people at their door steps.
He again appealed to the people to keep following the restrictions and SOPs/guidelines issued by the Administration as they are for their own benefit and protection from Covid-19.
He informed that people can also share their grievances on official Twitter account of Deputy Commissioner “@dcjammuofficial” or through Facebook “District Administration Jammu ” and “District Information Center Jammu”.

300 vacancies of Principals, 700 of Head Masters to be filled up soon. J&K GOVT