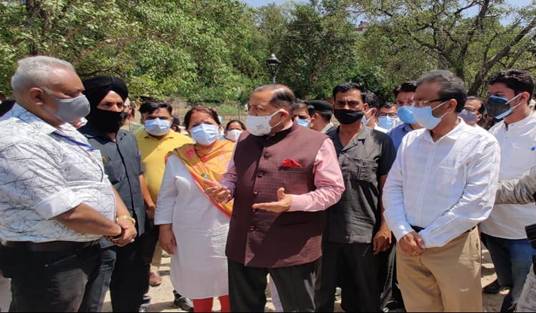 Udhampur: Union Minister Dr Jitendra Singh on Saturday said that the River Devika National Project Int Jammu & Kashmir is going to reflect “our collective pride and faith”, and will be the first-of-its kind in North India.

Therefore, he said, it is important that the concerned authorities executing the work should take all sections of society in confidence, regardless of ideology or political affiliation, so that when this project is accomplished, it is seen not only as a role model for similar other projects in other parts of the country but should also signify a sense of harmony and unity which river Devika has symbolised over the centuries.

During a visit to the site of the Devika Rejuvenation Project and the subsequent meeting here today, accompanied by DDC Chairman Lal Chand Bhagat, District Development Commissioner InduKanwalChib, Municipal Chairman Dr Yogeshwar Gupta, former Minister Pawan Gupta, Heads and senior officers of different Engineering wings and executing agencies, Dr Jitendra Singh reiterated that while there should not be any compromise in the quality of work, at the same time, there should be no hesitation to receive logical suggestions or inputs coming from any quarter. He said, he visualises the historic Devika Project not only as a project of faith but as a monument of consensus and conciliation.

Comparing it with the pioneer “NamamiGange” project of the Central Government, the Minister thanked Prime Minister Narendra Modi for sanctioning the Devika project, which was formally launched by Modi during his visit to Jammu in early 2019. He said, it is now the responsibility of all of us to accomplish this project with the same spirit and confidence with which it was cleared and sanctioned by the Modi Government.

Dr Jitendra Singh recalled that only last week he had conducted a thorough review of the project through a virtual meeting, which was also attended by Chief Secretary Arun Kumar Mehta and Principal Secretary Urban Development Dheeraj Gupta. He had emphasised on increasing the pace of work to make up for the time lapse on account of COVID pandemic and had also stressed the importance of optimum coordination between the Contractor agency and the Engineering wings. He had, in that meeting, stressed the importance of monitoring the project on a regular basis and his visit to the site today was also meant to underline this.

At the site, Dr Jitendra Singh was updated about the current status of the work. He was also informed that alleged lack of cooperation from the Contractor agency reported earlier has been sought to be corrected by imposing a fine on the Contractor, who had now given assurance that there would be no laxity hereafter

Under the Centrally funded Rs.190 crore National River Conservation Plan (NRCP) Devika project, bathing “ghats” (places) on the banks of the Devika River will be developed, encroachments will be removed, natural water bodies will be restored and catchment areas will be developed along with cremation ground.

The project includes the construction of three sewage treatment plants of 8 MLD, 4 MLD and 1.6 MLD capacity, sewerage network of 129.27 km, development of two cremation ghats, protection fencing and landscaping, small hydropower plants and three solar power plants. On completion of the project, the rivers will see reduction in pollution and improvement in water quality.

The Devika river also holds great religious significance as it is revered by Hindus as the sister of river Ganga. In June last year, Dr Jitendra Singh had also inaugurated the important Devika Bridge in Udhampur. Apart from taking care of traffic congestion, the Devika Bridge was also meant to help smooth passage of Army convoys and vehicles.

At the same time, the accompanying officers also conveyed that as per the instructions of the Minister, a “Work Audit” was planned to ensure that there was no compromise on the quality of work. During the site visit and the subsequent meeting, the Minister was accompanied by prominent local leaders including DDC Chairman Lal Chand Bhagat, Municipal Chairman, Dr Yogeshwar Gupta, former Minister Pawan Gupta, senior leaders Puran Chand, Vivek Gupta, Parashar, and others, local Councillors, youth leaders led by Sushant Gupta and others.