Monsoon arrives a fortnight ahead of schedule in J&K 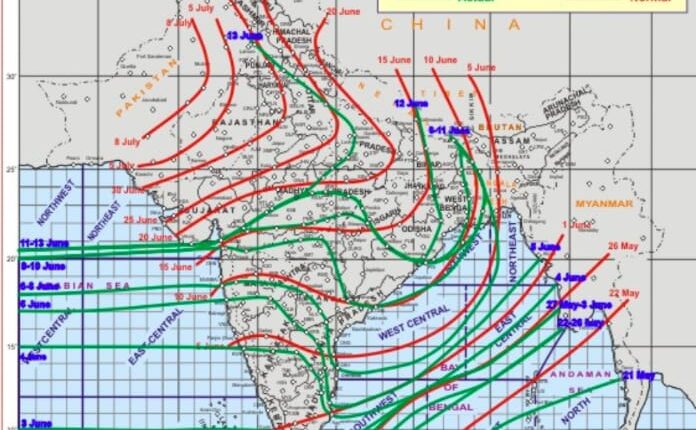 Srinagar: Monsoon has arrived in Jammu and Kashmir, 17-18 days ahead of its schedule this year, Indian Meteorological Department officials said on Sunday.

“IMD has declared arrival of Monsoon over J&K and Ladakh today (June 13) which is 17-18 days ahead of normal onset date—30th June or 1st July,” IMD Director Sonam Lotus said. “This Monsoon season, IMD has forecast normal monsoon rain over whole J&K and Ladakh,” he said, adding, “Let’s hope for the best.”

Meanwhile, a meteorological department official here told GNS, a Kashmir based local news agency that Srinagar, the summer capital of J&K, recorded maximum temperature of 28.4 degrees Celsius. While the temperature was 0.4 degrees Celsius below normal, it was six degrees less than previous day.

Former militant among two held for twin blasts in Udhampur…

The weather office has forecast scattered to fairly widespread light to moderate rain and thundershowers in Jammu and Kashmir divisions in next 24 hours.

For next two days, the weatherman has forecast fairly widespread light to moderate rain and thundershowers.

The weather department has also issued ‘yellow warning for “isolated lightning/ thundershowers with gusty wind 30- 40-kmph” for both Jammu and Kashmir divisions till June 15. There are four types of colour codes signifying the level of caution: green which means no action, yellow—situation to be watched), amber –government agencies need to be prepared for severe weather and red –action needed by the agencies.

No Vehicle With Outside Registration Number To Ply In J&K: Govt