Def Min Rajnath Singh, in presence of Union Minister @DrJitendraSingh , today formally inaugurated the Dogra Mandir to Parole and Parole to Janiyal-Bamiyal road project in dist Kathua, which has been constructed by the BRO at a cost of around Rs.46 Crore 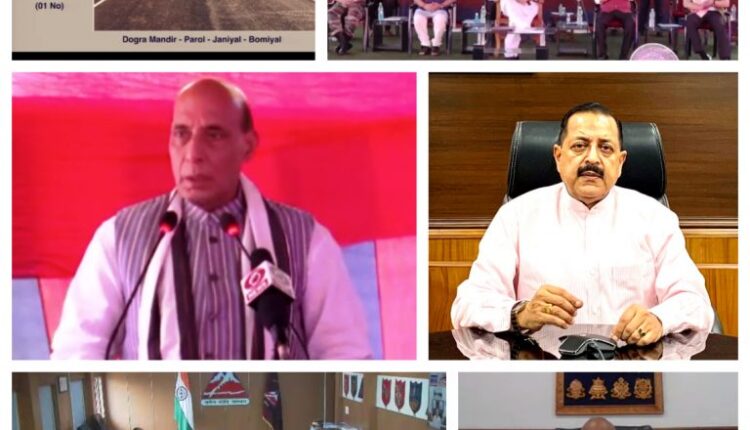 NEW DELHI: Union Defence Minister Rajnath Singh, in presence of Union Minister Dr Jitendra Singh, today formally inaugurated the Dogra Mandir to Parole and Parole to Janiyal-Bamiyal road project in district Kathua, which has been constructed by the Border Roads Organisation (BRO) at a cost of around Rs.46 Crore.
The road is important because it connects the UT of Jammu & Kashmir and the State of Punjab. The total length of the road is 16.375 KM and it will also make connectivity to the nearby villages, thus enabling mobility for the local people as well as the Army in the border areas.

During the same function, Defence Minister Rajnath Singh inaugurated twelve BRO road projects in total, out of which ten are located in Arunachal Pradesh, one in district Kathua of Jammu & Kashmir and one in Ladakh. Dr Jitendra Singh said, he was personally delighted to note that while Kathua was part of his parliamentary constituency, Arunachal Pradesh was part of his ministerial constituency and both the regions had received focussed development on priority ever since Narendra Modi took over as Prime Minister.
Rajnath Singh also inaugurated the Kimin-Potin Road, the double-lane 20 KM road constructed by the Border Roads Organization, which will facilitate the establishment of the proposed industrial belt in Arunachal Pradesh. The road will also serve as the main artery for the Lower Subansiri district from Assam.
In his address after the inauguration ceremony, Rajnath Singh said that Northeastern States are increasingly playing an important strategic role with Prime Minister Narendra Modi saying that the region has the potential to become India’s growth engine.
“Last year in Galwan Valley, our soldiers displayed exemplary courage and valour in line of duty. I salute all brave soldiers who laid down their lives fighting for our nation,” said Defence Minister Rajnath Singh
Union Minister Dr Jitendra Singh said that in his Lok Sabha constituency of Udhampur-Kathua-Doda alone, BRO had constructed over 200 roads and bridges during the last over five years years and the notable among them are Atal Setu at Basohli and Devika Bridge at Udhampur. He said, Jammu & Kashmir had witnessed unprecedented progress in road and bridge construction in the last 5 to 6 years.
Dr Jitendra Singh also referred to BRO undertaking the historic project for construction of proposed Chattergala tunnel which will connect district Kathua with district Doda in Jammu & Kashmir, enroute the new Highway via Basohli-Bani through Chattergalla to touch Bhaderwah and Doda. This is going to be a landmark project providing all-weather alternate road connectivity between the two distant regions and reducing the travel time from Doda to Lakhanpur to just around four hours.
Dr Jitendra Singh said that the all-weather road connectivity will bring ease of business, shorten the travel time and also provide a unique opportunity for places like Bani and Bhaderwah to emerge as tourist destinations of national repute.
The other ongoing BRO projects in the constituency include construction of road from Bhagwa to Lal-Darman to Masal-Dushnan in district Doda, Chkramore-Maharajpur-Rajbagh-Haria Chak road in district Kathua and upgradation of Phatala to Jakhani road in district Udhampur.

J&K | A massive fire broke out in store of R&B containing wood, tarcool & other flamable material in it near SDM office in middle of Thatri. Due to prompt response by SDM under directions of DC Doda it was controlled with no loss to life.

Every Panchayat in J&K to have a Youth Club for Constructive activities. In first phase, 22,500 Youth from 4290 Panchayats to be engaged. Govt to incur expenditure to the tune of Rs.12 Crore for this initiative: LG Manoj Sinha