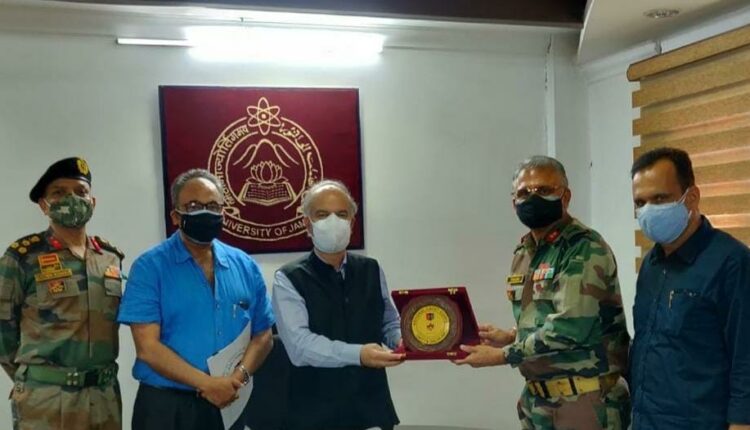 Jammu:Major General Ranjan Mahajan, Additional Director General, NCC Directorate Jammu, Kashmir and Ladakh today interacted with Professor Manoj Kumar Dhar, Vice Chancellor, University of Jammu with regard to implementation of NCC as a General Elective Credit Course in Colleges under Jammu University.
NCC is currently treated as an extracurricular activity in majority of schools and colleges across the country.  In keeping with the New Education Policy of the Union Government, NCC is now being offered as an Elective Credit Course under Choice Based Credit System (CBCS) with the objective of harnessing the full potential of NCC’s capacity in youth development and enlarging the student base taking up NCC training for Nation Building.
The rationale behind offering NCC as an Elective Subject, Credit Course design, modalities of implementation, rules and regulations  aligned with University Grant Commission explained by the ADG have been  well appreciated by the VC who also expressed his willingness to take the proposal to a reality earliest.  He also assured implementation of the scheme after ‘in house’ deliberation with the academic staff and College Principles, in an early time frame.  It would be pertinent to mention here that Kashmir University and Central University of Jammu have already implemented the same.
The meeting was also attended by Dean Academic Affairs, Director Colleges Development, DeanStudent Welfare and Deputy Registrar of University of Jammu and other Senior NCC Officers in Jammu.