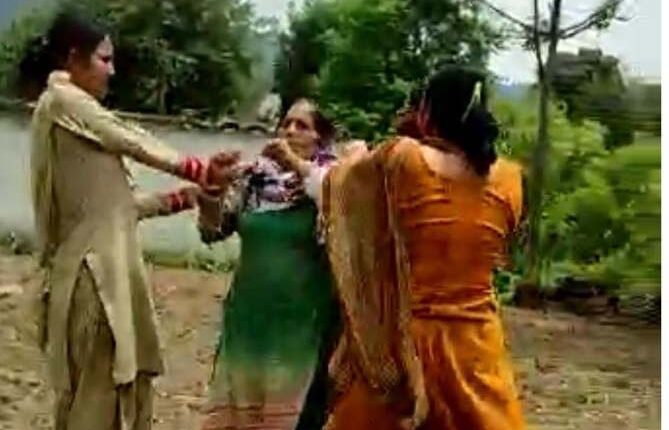 Jammu: To have 100 per cent vaccination in a block of border Rajouri district as part of the J&K government’s drive against COVID-19 pandemic, a Block Medical Officer within two days of rejoining office after recovering from Covid, walked 3-km on foot on a hilly terrain to convince people belonging to his own community.

He was leading a medical team which was accompanied by police including women cops.

While most people obliged, a few others who refused to listen and tried to flee from their homes as they still had fear about the vaccine, police used force to get them vaccinated.

Sources said that the incident took place on Wednesday in Sunderbani block’s Chawrian Mohrah falling under Patrara Panchayat. The Mohrah with 35-40 Gujjar families was the only roadblock in administration’s achieving 100 per cent vaccination among people above 45 years in Sunderbani block which, according to BMO Dr Manzoor Khan, has become the first among 19 blocks of border Rajouri district to achieve the milestone.

It was the sixth attempt by the administration to vaccinate them, said Sunderbani BMO Dr Khan. He was specially asked by the Sunderbani Additional Deputy Commissioner Vinod Behnal to accompany the medical team as all earlier attempts to convince villagers had failed.

During previous visits by the health teams, the villagers used to flee from their houses and hide in the forests, making it extremely difficult for the former to trace them. Even the incharge BMO Dr Neena Sharma had gone there, but of no avail as the villagers used to alert each other on seeing them from a distance, sources said, adding that they were even pelted stones.

On Wednesday too, as the health team accompanied by police including women cops reached there, some people started pelting stones. The situation got saved after BMO spoke to the people in their own Gojri language and told them about the positive aspects of the vaccine in view of the current pandemic, telling them as to how vaccination saved him from getting hospitalised after he became COVID positive.

Convincing everybody get vaccinated had not been so easy, BMO said, adding that villagers at various places had heated arguments with them. However, when told as to why vaccination was necessary to ensure people have a normal life, most of them volunteered to have the first dose.

When asked about the use of force in vaccinating people, BMO said that he personally does not approve it, but it is the decision of the administration. However, what is the option when one refuses to listen at all the logic and the administration has to ensure protection of all the people from COVID-19 pandemic especially ahead of the third wave, he asked.

To vaccinate all the people in Jammu and Kashmir, health teams are moving door to door in far off areas and even trekking long distances on hills to reach even nomadic Gujjars and Bakarwals who have moved along with their cattle to their highland pastures on the higher reaches in view of summer.

Our total oxygen capacity in August-September was 15,000 LPM. It now stands at 54,000 LPM. 4 districts have achieved 100% vaccination of people above 45 years of age. Employment, new industrial policy, sports, culture, etc were discussed in the meeting: J&K LG Manoj Sinha