DRUG ABUSE : THE MORE YOU USE, THE LESS YOU LIVE 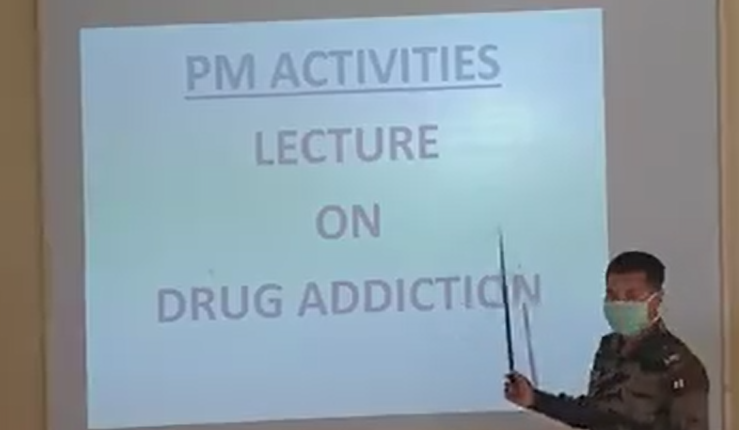 Jammu: Drug abuse is a social evil and a menace in society which damages the lives of all sections of society. Any person can be affected by drugs regardless of age, gender, economic status etc. Many people do not realise that addiction is a chronic, progressive condition that requires professional treatment, help and support. Drug abuse does not just affect the addict it has a far reaching effect which encompasses family, friends and community as a whole. To make youth aware on the issue, an online lecture on “Drug Abuse” was organised by Army at Palma in District Rajouri(J&K).
During the lecture, youths were sensitised about various aspects of drug abuse, which included type of drugs and their adverse effects on the health, family and society. The symptoms, treatment and rehabilitation of drug addicts were given due emphasis during the discussion. The speaker explained to the audience how the drug traffickers are playing with the lives of youth by pushing them into the vicious cycle of drugs by initially supplying the contraband at a low cost and once the person gets addicted to it, then exploiting teen to their benefit. On being asked about the cure, speaker explained that for drugs “Prevention is better than cure”. However, there are various rehabilitation centers being run by the state government and NGOs that not only treat the drug addicts but also helps them in living a normal life. It was emphasized that an affected person must be taken for rehabilitation at the earliest to overcome the menace.
A total of 20 Locals youth attended the lecture. The audience appreciated the efforts of the Army in organising such events which generates awareness and a feeling of goodwill amongst the civil population, especially the youth.

Congratulations to Mawya Sudan, daughter of J&K, who has been commissioned as a Flying Officer in the Indian Air Force. It is a matter of immense pride & joy to see you scripting history. With this achievement, you have lent wings to the dreams of millions of our daughters.J&K LG Manoj Sinha