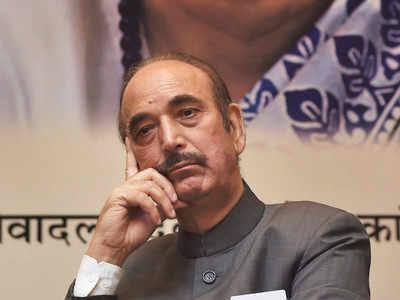 New Delhi: Restoration of full statehood in Jammu and Kashmir will be the main agenda when top leaders from the Union territory meet Prime Minister Narendra Modi on June 24, Congress leader and former Jammu and Kashmir chief minister Ghulam Nabi Azad has said.

Azad, however, didn’t say if his party would demand a restoration of Article 370 which the Centre abrogated in August 2019, stripping Jammu and Kashmir of its special status.

Sabse unchi demand statehood ki hogi (the top demand will be statehood). That will be top of the agenda. And it was promised on the floor of the House as well. Full-fledged statehood…not L-G’s statehood,” Indian Express quoted Azad as saying.

Fourteen leaders including former chief ministers from prominent parties in Jammu and Kashmir have been invited for a meeting with Prime Minister Narendra Modi on June 24. This is the first time the Centre has a called a meeting with local leaders after abrogating Article 370 in August, 2019 and splitting the erstwhile state into two Union territories.

Azad said that he is still discussing the issue of restoration of Article 370 with leaders from the Union territory and will then discuss with his party leadership.

“I am consulting Congress leaders from both Jammu and Kashmir. After that, I will seek guidance from our party’s leadership – the Congress president and former prime minister Manmohan Singh – and those colleagues who were directly or indirectly involved in this…So it is too early to say. Yes, I can say that full statehood will be top of the agenda,” Azad said adding that the party will plan its stance and policy after discussions.

The Jammu and Kashmir Policy Planning Group of the Congress is reportedly slated to meet on Tuesday to arrive at the party’s stand during the meeting with Modi. The panel consists of Azad, Manmohan Singh, Karan Singh, P Chidambaram, AICC in-charge Rajni Patil, Tariq Hamid Karra, and Ghulam Ahmed Mir.

Ahead of the meeting on June 24, the Gupkar alliance consisting of prominent Jammu and Kashmir parties is also slated to meet on Tuesday. Most of the leaders have welcomed the move to initiate talks by the Centre.

The National Conference has lauded the meeting as a “good change” stressing that it is proof that the Centre has realized that it cannot move in Jammu and Kashmir without the support of mainstream parties.

“This is a welcome,” he added.

Jammu and Kashmir | Rifle recovered from LeT terrorist Khurshid Mir who was killed in Sopore encounter is the same as the one snatched in Lawaypora attack, in which 3 CRPF personnel lost their lives. Will neutralize second murderer Nadeem Abrar soon: Kashmir Zone Police

Congress decides to participate in all party meeting on 24th