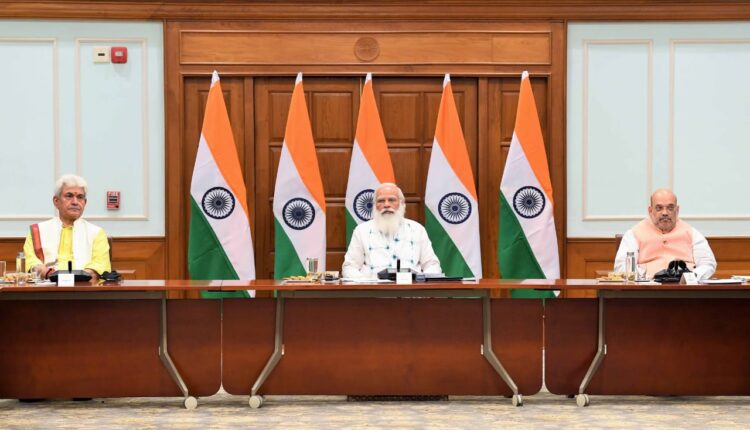 Jammu: Jammu and Kashmir government will review the cases of all those detained under Public Safety Act in the Union Territory soon.

Sources said that during all party meeting on Jammu and Kashmir on Thursday, when the issue was raised by the opposition parties forming People’s Alliance for Gupkar Agenda, Prime Minister Narendra Modi assured a committee to secure the release of political prisoners.

Union Home Minister Amit Shah presented data on the issue at the meeting, saying that 40 people were detained under PSA including some political prisoners. While the political prisoners have been released, a committee will be constituted under the chairmanship of UT’s Lt Governor Manoj Sinha to review the all the old and new cases of detentions under PSA.

Prime Minister Narendra Modi committed to restore the statehood to Jammu and Kashmir, but did not give any deadline. Nearly two years after the abrogation of Article 370 on August 5, 2019, it was the first-ever all-party meeting with 14 leaders of eight political parties of Jammu and Kashmir, including four chief ministers, held at the initiative of Prime Minister so as to restore activities of democracy that were taken away with the arrest of all Opposition leaders.

As leaders of all the opposition parties asked for restoration of statehood to Jammu and Kashmir, Prime Minister said that let the delimitation of assembly constituencies be complete and assembly elections held.

The Prime Minister acknowledged political differences but said that everyone should work in national interest so that ultimately, the people of J&K get benefitted. He also said that an atmosphere of safety and security needed to be ensured for all sections of society in J&K.

The main focus of the meeting was to strengthen the democratic process in J&K, which the Prime Minister expressed full commitment towards, the sources said. Holding assembly elections as successfully as the DDC elections were conducted was a priority, PM said.

It was discussed in the meeting that elections could happen soon after delimitation, the sources said, adding that most participants were willing towards the idea.

The PM emphasised the need to strengthen democracy at the grassroots level as well, and to work together with the people of J&K to ensure their upliftment. According to the sources, Modi expressed happiness on the commitment to the Constitution and democracy espoused by all participants.

However, he expressed grave sadness on conflict persisting in the region, saying that even one death in J&K was painful and that it was their collective duty to protect the younger generation.

“I am not going to fight any election till Article 370 and 35A are restored. Otherwise, people will say that I am doing it for political gains”: Mehbooba Mufti, Former Chief minister of J&K, on elections in J&K

PDD to have online system for power inspections and certification: Rohit Kansal